Courtney Wagner is the only child of the iconic Hollywood actress Natalie Wood and her husband, TV star Robert Wagner. Where is she now? She is a jewelry designer who has had troubles in her own life.

Wood mysteriously died while on a yacht with Wagner and Hollywood actor Christopher Walken in 1981. Courtney, who was only 7 years old at the time, and her sister Natasha Gregson-Wagner were interviewed for a new HBO documentary on Natalie’s mysterious death. Their father Robert Wagner also spoke in the documentary. The documentary was co-produced by Natasha, who, according to The Los Angeles Times, helped make the documentary to confront head-on the lingering suspicions about Wagner and to detail what Wood meant to her family. The documentary runs May 5 at 9 p.m. EST.

Gregson Wagner defended Wagner, who is her stepfather, saying, according to The Associated Press, that he “has been so (misrepresented) by people who don’t know him. He is somebody who’s just so incredibly forthcoming and so genuine and so authentic.”

But what of Courtney? What has her life been like since her mother died? She is now 46 years old. Today, she strongly defends her dad, saying:

Having gone through something like that together I always felt especially bonded to my dad and Katie (their other sister) and Natasha. It made me feel especially angry for all the terrible things said about my father. I was furious at the accusations being said about him, it felt incredibly disrespectful especially knowing the source of where these accusations came from. It was so transparent that certain people exploited my family like this and it makes me very protective of my father. I love him so deeply so and it has gone on for so long that I still can’t believe they actually write such untrue things.

She also said, according to People Magazine: “My sister did a beautiful job capturing what a fierce, professional, loving person my mom was. I am so proud of Natasha and I know my mom is too.”

1. Courtney, Who Once Faced a Drug Accusation, Remembers Her Mom’s Hands Most

Courtney’s life has not been untroubled. In 2012, the then 38-year-old was accused in Los Angeles of “suspicion of heroin and cocaine possession,” according to EOnline.

According to People Magazine, Natasha discussed her sister’s travails, saying, “Courtney is somebody who lives in the truth and her recovery demands that of her. She is not ashamed of her struggles. She has gotten to a place where she has compassion for herself and forgiveness.”

However, Courtney was never charged. The case was rejected by prosecutors “due to illegal search and seizure, a violation of Wagner’s Fourth Amendment rights,” reported the entertainment site, adding that the drugs were allegedly found in her home in the Malibu area of California. A handgun was also allegedly found during the search.

Over the years, the private Courtney has only said a few things about Natalie.

In one poignant interview, Courtney said of her mom, “Her hands. I remember her hands – they were so soft. And she had such a distinctive voice and laugh.” You can see a photo of a young Courtney here.

2. Courtney Has Worked as a Jewelry Designer

US Actor Robert Wagner(2ndL) gets a kiss from daughter Courtney(2ndR), and wife actress Jill St. John(L), and daughter Katie(R) look on during an unveiling ceremony for his star on the Hollywood Walk of Fame 16 July, 2002 in the Hollywood area of Los Angeles, CA.

The site reported in 2015 that Courtney is so publicity averse that she isn’t on Facebook or Twitter. For a time, she ran a jewelry collection called Wagner & Ko, and she said she hoped her fine jewelry work would have made Natalie Wood proud.

After her mother died, Courtney Wagner and her sisters “stayed on the road with their father, spending a lot of time in Switzerland,” reports ABC news, quoting her as saying, “I think that everything Dad did then — like not being around this crazed atmosphere in L.A. with the paparazzi — was a good idea. It brought us all closer together. And I always had compassion and respect for him for keeping the family together — it could easily have fallen apart.”

Robert Wagner with two of his daughters, including Courtney Wagner (left).

It’s human nature to wonder what Courtney thinks about all of the questions swirling around her mother and father. However, she has said very little about it over the years until now. She did make a few cryptic comments on a radio show in 2015.

In another interview, she recalled the moment she learned that Natalie was dead. “I remember waking up to my sister screaming, and luckily I had a nanny that I was very close to that was by my side. There were all these people in the living room, and my dad told me I wasn’t going to see my mom again,” Courtney Wagner told FOX411’s Pop Tarts column in 2012. “I was just trying to make sense of it, and dad was asking if we wanted to go and see her one last time.”

“We were all so shattered by the loss, and we were hanging on to each other,” Robert Wagner told PEOPLE in 2016. “You just take it moment by moment and hope that it gets better.”

According to ABC News, she said in another interview, when asked if she feels pressure because she’s the child of the two acting legends, “The only pressure I would ever feel is, I would always want my family to be proud of me. I just want my dad to feel he raised a solid person to be compassionate and care about the things that he cared about.”

In another tragedy, Courtney’s fiance died in a motorcycle crash in 2005. His name was Max LeRoy.

4. Natalie Wood Had a Second Daughter With Another Man

Courtney Wagner has an older sister named Natasha Gregson Wagner. Natasha is not the biological child of Robert Wagner, however; she is the daughter of Natalie Wood and Richard Gregson, defined by The New York Times as an “English agent and producer.”

Robert Wagner has a third daughter named Katie with Marion Donen, whom he married in between his marriages to Natalie Wood, according to The Times. Of her mother’s death, Natasha told The Times, “I know it was an accident.”

Courtney was only 7 when her mother died. She is the only biological offspring of the Wood/Wagner union.

Natalie Wood and Robert Wagner, now 87, had a famously tempestuous relationship, although whether it ended in murder has never been proven. They married, divorced, and remarried before Natalie drowned during a night on the couple’s yacht.

Robert Wagner once wrote of Natalie’s death that the theories about it were “all conjecture. Nobody knows. There are only two possibilities: either she was trying to get away from the argument, or she was trying to tie the dinghy. But the bottom line is that nobody knows exactly what happened.”

However, the boat’s captain, Dennis Davern, a friend of the family, has changed his story over the years (and written a book). He now says that he heard a big fight on the deck and found Robert Wagner standing there with Natalie missing. According to Fox News, Robert “Wagner has also refused to talk to officials about Natalie’s death since the case was re-opened in 2011.” Natalie’s sister, Lana Wood, claims that Robert Wagner told her, “It was an accident… I’m sorry.”

Authorities held a press conference in 2018 to highlight their concerns about Robert Wagner. They say they have witnesses who heard the couple arguing on the back of the boat. “Yes, of course, we want to talk to Robert Wagner,” said Los Angeles County Sheriff’s Department Lieutenant John Corina. “You bet. His story… doesn’t really add up.”

“There’s actually more than one witness who came forward who heard them on the back of the boat arguing,” Corina said, according to Fox News. “It was really intense and it was so bad, [Captain Dennis Davern] went down to check on them because he was worried that there was some kind of an assault. That’s when he was told to go away by Robert Wagner…. Before it goes quiet.” 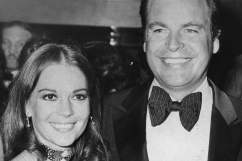