She married multiple times, worked in Hollywood as an actress for decades and all three of her children went on to successful careers in the same field. She retired in the 1970s and died at the age of 89.

Here’s what you need to know about Robert Wagner’s ex-wife:

1. She Had An Acting Career of Nearly 30 Years

Marshall started her career off playing smaller parts, many of which were uncredited. The International Movie Database (IMDb) shows that one of her first roles was as a guest in the 1947 dramatic romance, Gentleman’s Agreement. She also played a secretary in the 1948 movie, Sitting Pretty, a singer in The Street with No Name and Myrna in the 1949 movie, Dancing in the Dark. Between 1947-1949, Marshall starred in more than a dozen movies.

One of her more famous roles was playing Lt. Kitty Lawrence in the 1949 comedy, I Was A Male War Bride. She played female lead’s best friend alongside actors Cary Grant and Ann Sheridan. She was also one of the lead characters in the 1951 comedy That’s My Boy, as Terry Howard, the love interest of the movie’s protagonist, Junior Jackson, who was played by Jerry Lewis. 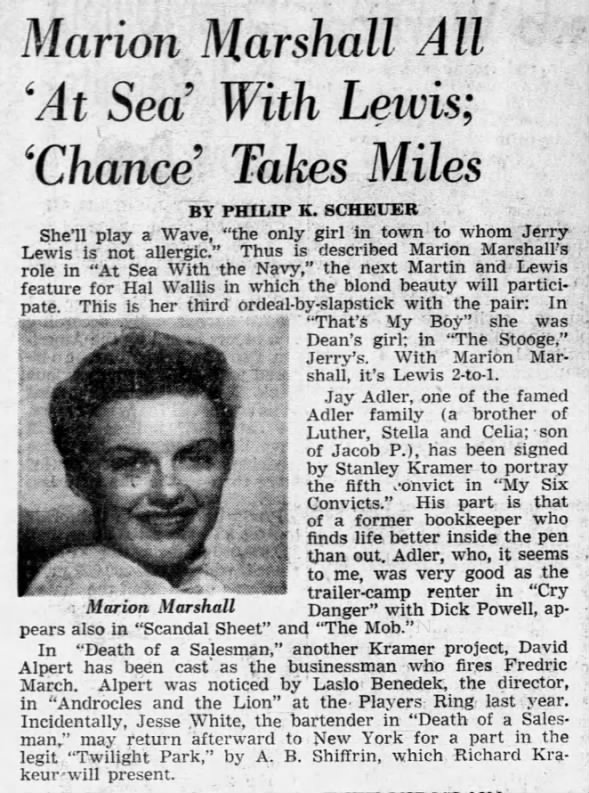 Marshall was featured prominently in The Stooge and Sailor Beware, two more comedies starring Jerrie Lewis and Dean Martin. Marshall also played in two episodes of Perry Mason in 1959, The Case of the Spurious Sister and The Case of the Shattered Dream. She also had an uncredited role in the popular 1958 movie, I Want To Live!, which starred Susan Hayward in the lead role.

Her career lasted for 28 years, and she played more than 30 movie and television roles before retiring.

2. She Was Friends with Marilyn Monroe

Marshall and Monroe, both working as models in the film industry, became close friends. In Gary Vitacco-Robles’ book, “Icon: The Life, Times and Films of Marilyn Monroe Volume 1,” he described how Marshall and Monroe would attend poker parties where big names in the film industries gathered and act as hostesses, “filling the men’s champagne glasses and emptying the ashtrays.”

The two starred in the movie A Ticket to Tomahawk in 1950, a Western comedy and musical. In the book, “Marilyn: The Passion and the Paradox”, author Lois Banner wrote about how both Marshall and Monroe signed contracts with Fox and as a result, changed their name. Marion, who went by the last name of Tanner on many legal documents, adopted the name Marshall because studios thought the MM combination “had a sexy lilt.”

On that day, Monroe adopted her famous “MM” name, although Banner wrote that she didn’t like it as much as her own name, Norma Jean Doughtery.

In an interview with Town and Country magazine, Robert Wagner described Marshall and Monroe’s relationship.

My second wife, Marion, knew her quite well; she and Marilyn had modeled together for several years, and were signed by Fox at the same time, where they were known as “The Two M’s.” Marion told stories about how the leading cover girls of that time would show up to audition for modeling jobs. If Marilyn came in to audition, they would all look at each other and shrug. Marilyn was going to get the job, and they all knew it.

Howard Hawks was a director who produced some of the most famous movies between 1930-1960, including Scarface, His Girl Friday, The Big Sleep and Gentlemen Prefer Blondes; he received an honorary Academy Award in 1974.

Marshall and Hawk met when she was 18, according to author Todd McCarthy in his book, “The Grey Fox of Hollywood.” She attracted attention with her humor and beauty and eventually caught Hawks’ eye. Rumors about the couple grew as they were seen together and they denied being engaged.

“Hawk’s romance with Marion Marshall had proceeded in fits and starts. In May, word slipped out that they were even engaged. On New Year’s Eve, the couple went public with the announcement that they would be marrying soon … Plans went ahead accordingly but, suddenly, on February 4, amidst rumors of serious problems, the wedding was abruptly called off.”

The book goes on to quote Marshall’s friend, Jane Greer, who suggested that Marshall was frustrated with Hawks for not providing her with any large film parts. She particularly wanted to be the female lead for the movie, Twentieth Century. After the wedding was canceled, Hawk went to Arizona.

4. She Was Married Twice Before She Married Robert Wagner 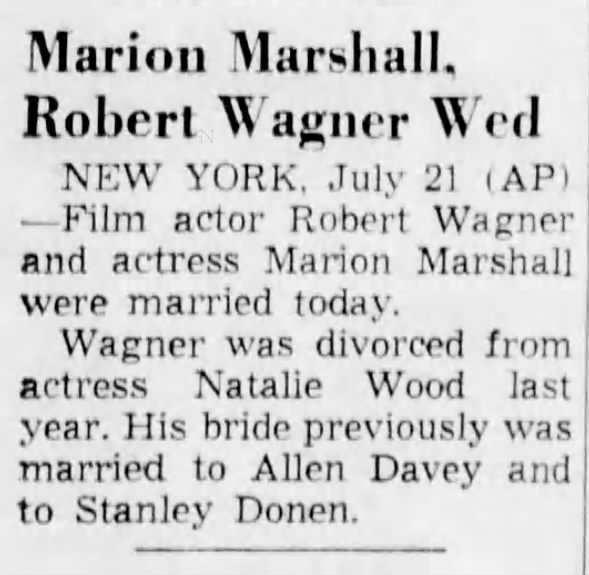 Marshall married three times and all of her husbands were somehow involved in the film industry. Marriage records show that Marshall married her first husband, Allen Davey Jr. on Nov. 27, 1945. Davey was a director and he is most famous for his role in directing the TV series, The Six Million Dollar Man and Dallas. The couple divorced in 1948; she was 16 when they married.

Marshall married Stanley Donen at the age of 22 on May 20, 1952, according to marriage records. During that time, Marshall had two children, Peter and Joshua Donen. Donen was a director, most famous for his role in directing Singin’ in the Rain. They divorced in the summer of 1959. Marriage records show that she was still going by her name of Marion Tanner Donen when she met Robert Wagner.

Of Donen, Wagner told David Fantle in the book, “75 Candid Interviews” with Golden Age Legends, “Stanley’s not a man I want to talk about. He’s the most terrible person I ever met in my life. I raised his two sons.” He went on to say how both the sons were close to him and how Stanley only came to his son Peter’s funeral for 15 minutes.

Marshall married Robert Wagner in Manhatten in 1963, marriage records show. Wagner was an actor who played several lead roles in film before transitioning to television. He landed a big role in It Takes A Thief, an espionage television show where he played alongside Fred Astaire; Wagner went on to play amateur detective Jonathan Hart in the series Hart to Hart; Marshall played in an episode of It Takes A Thief, the episode Glass Riddle in 1968. They had one daughter together, Katharine Wagner. The couple divorced in 1971, divorce records show.

5. All of Marshall’s Children Went On To Hollywood

Peter Donen was born Dec. 20, 1953, birth records show. Donen studied naval architecture and was a sailor, the article noted, before he started his film career as a production manager and eventually became a freelance visual effects supervisor. As a visual effects supervisor, he worked on L.A. Confidential and Superman III, The Horse Whisperer, Die Hard 2 and The Bourne Identity. Donen died of a heart attack, Variety reported; a death record shows he died Jan. 5, 2004.

Joshua Donen, 65, was born Aug. 10, 1955 in Los Angeles, California, birth records show. Donen married Nicolette Bret Mount on March 11, 1995 and the couple have one child. Donen was a producer and writer for several well-known shows and movies including The Quick and the Dead, Gone Girl and House of Cards. He won a Primetime Emmy for the 2019 animated program, Love, Death & Robots and he was nominated from 2013-2017 for his work with House of Cards.

Katie Wagner, Marshall’s last child, was born May 11, 1964 in Los Angeles, birth records show. Wagner was 7 when her parents divorced. According to the Los Angeles Times, she appeared with her father Robert Wagner on the show Born Famous in 1987. She would go on to work on Hollywood Report, Live from the House of Blues and several shows on the TV Guide Channel. She also guest-starred on the episode of Charmed as a newswoman in the episode Styx Feet Under.