Tomb Raider takes us back to the very beginning of Lara Croft’s interest in tomb raider/treasure hunting. Lara climbs aboard the ship Endurance with her fellow researchers/adventurers as she looks to solidify herself in the eyes of her peers. Lara’s the only one you’ll have to care about here, since her stereotypical companions are nothing but plot fodder and multiplayer skins.

When the Endurance is taken apart by a raging storm, Lara and her friends become stranded on a mysterious island located in the heart of the Dragon’s Triangle. From this point forward, Lara must fend for herself as she hunts for food, fends off bloodthirsty wolves, faces off with violent mercenaries and looks for survivors. Lara Croft’s quick maturation happens in front of our very eyes during her stay on this secret-riddled island.

Lara’s troubled introduction to the island involves a ton of story development, integral cutscenes and quick time events. This results in an introductory portion of the game that helps players feel and see Ms. Croft’s most hair raising and heart wrenching moments. One of the more dramatic set pieces occurs when Lara makes her first kill. This scene is emotionally impactful, as Lara must come to grips with what she did and what she must do from that point forward. Lara must then contend with deep pitfalls, dangerous parachute landings, rabid wolves and the twisted denizens who habit the island.

Once the game’s environment becomes readily available for more exploration, everything starts to click. Players will enjoy leveling up Lara as they hunt for food, engage her enemies, discover tombs and discover locations for the first time. If feels like everything Lara does helps her develop into a more worthy hunter/adventurer, which is a stark contrast to her former self at the start of the game.

Lara’s armory serves her well and the hand-to-hand/armed combat feels tight and visceral. The first time you unload an arrow into some hapless victim, you’ll want to do it again and again. You’ll also feel a twinge of glee when you drop a baddie with Lara’s shotgun. The violence factor is ratcheted up for this reboot, so be prepared to cringe at a few death scenes.

For those fans of the past Tomb Raider’s, you’ll undoubtedly enjoy the game’s puzzle-ridden tombs. These secret sections start off easy and then gradually grow in difficulty as more tombs are found. These tombs are fun diversions that are fun to solve and traverse. It’s here where players get to know Lara and her fascination of archaeology and ancient treasure. The main story campaign doesn’t take a backseat to these tombs, so the plot and the side missions get equal attention. Once you complete the main story missions, there’s still plenty to do on the island. The replay factor is high on this one.

Tomb Raider’s single player shines the most, but things start to turn for the worst thanks to the game’s multiplayer. This online mode feels completely hacked-on, unimportant and unnecessary. Players take control of survivors or mercenaries on a variety of maps, but all the modes are fun for about 30 minutes or so. The multiplayer tries mechanics to differentiate itself from other shooters (setting traps, for example). But it doesn’t do anything else to stand out from the pack. You’ll feel like the single player portion of the game could have been even better, if only the multiplayer section wasn’t thrown into the mix. Thankfully, the multiplayer doesn’t do too much to hurt the game’s overall quality. 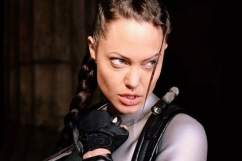 Who Would Make the Better Lara Croft? Angelina, Jessica or Kate

The harrowing situations Lara finds herself in help her mature into the Lara Croft we’ve come to appreciate. Young Croft can take a beating, but her newfound thick skin helps keep her alive.

Tomb Raider will land on store shelves on March 5 for the Xbox 360, PS3 and PC.

Lara Croft’s origin story manages to revive the stagnant Tomb Raider franchise. This is certainly one of the best action/adventure games of 2013. Raid your local game store and get it!