Deadpool, the first video game with Marvel’s “Merc With a Mouth” as the main character, is the comic-book gaming event of the summer. Here’s everything you need to know about Deadpool‘s release date, game trailers, price and pre-order bonuses! 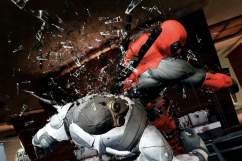 Deadpool: Game Trailers and Gameplay Videos You Need to See


For those of you who pre-order the game from Amazon, you’ll receive $5 worth of credit toward select Marvel graphic novels. You’ll also be provided with an exclusive digital wallpaper, along with a digital cover sleeve.