Tom Clancy’s Splinter Cell: Blacklist is looking to save bored gamers from the usual summer gaming drought. Sam Fisher and his Fourth Echelon espionage agency are returning to the world of covert-ops and government conspiracies. This August gaming release should be on your radar.

Here’s the top 10 facts you need to know about the latest title in the Splinter Cell series.

Splinter Cell: Blacklist was hinted at by Jade Raymond from Ubisoft Toronto in November 2010. The game was officially revealed during Microsoft’s E3 2012 press conference, which was done through a gameplay trailer that also showed off some elements of the Kinect’s vocal features.

During the same press conference, the familiar voice of lead character Sam Fisher was announced as having a new voice actor – Eric Johnson. Longtime voice actor for the character, Michael Ironside, decided to pass on the voice acting duties to Eric Johnson.

The change in voice actors was primarily done in order to utilize the new performance capture technology for the game.

2. The Plot Revolves Around A New Version of the “Echelon” Group

The official plot synopsis for the game comes courtesy of the game’s Wiki page:

Following the Third Echelon Conspiracy, former agent Sam Fisher joins his friend Victor Coste at his PMC, Paladin 9. Coste is wounded in an attack by The Engineers, a group of 12 terrorists who initiate a terror ultimatum called the Blacklist – a deadly countdown of escalating terrorist attacks on United States interests. Reason being, these 12 have had enough of the United States global military presence in two-thirds of the countries around the world.

Splinter Cell: Blacklist takes place six months after Splinter Cell: Conviction. Sam Fisher is the commander of a new special operations & counter-terrorism unit called Fourth Echelon, and directly reports to the President of the United States. The primary mission of Fourth Echelon, as assigned by the President, is to shutdown all current operations being conducted by Third Echelon and their agents. While conducting this primary mission, Sam and his team must hunt the members of The Engineers and their Blacklist agenda by any means necessary, and stop the countdown before it reaches zero. Splinter Cell: Blacklist sees the return of Anna ‘Grim’ Grímsdóttir, Victor Coste and Andriy Kobin as well as the addition of new characters such as Isaac Briggs and Charlie Cole.

Fourth Echelon will be traveling all over the world this time around. The locales that this game covers geographically are:

3. A New Gameplay Mechanic is Making Its Debut

One of the newest gameplay mechanics being added to the game is a feature dubbed “Killing in Motion.” This feature will allow players to highlight multiple targets and eliminate all of them in one quick succession. The game’s third-person perspective will let players spot all enemies within their vicinity, which makes this feature easier to see in action.

4. The Xbox 360 Kinect and Wii U’s Touchscreen are Both Compatible

The Xbox 360 Kinect peripheral will let players say all types of phrases that the mic will pick up. These phrases will transition into the game itself by letting your said phrases be heard by enemies so that you can distract them. The Kinect sensor will also let players control Sam Fisher through the motion sensor abilities.

As for the Wii U’s touchscreen, the game will make all in-game gadgets and items accessible through the touchpad. The touchscreen will also utilize the game’s screen/motion controls in order to take advantage of the “Killing in Motion” mechanics.

5. The “Spies vs. Mercs” Multiplayer Mode is Back

In an interview with the game’s producer Sebastien Ebacher, Xbox360Achievements.com got some info on the Blacklist’s multiplayer mode:

After Splinter Cell: Conviction, the number one feature requested by the fans was Spies vs. Mercs. So it’s a multiplayer mode that appeared first on Pandora Tomorrow and was not present in Conviction. The multiplayer is based on cat and mouse. So one one side you have a class of Spies who see from a third-person perspective and have to hack terminals, and on the other side you have a class of first-person Mercs that have to protect those terminals. They’re two classes that really have a different set of tools and abilities that they have to outsmart and overpower each other.

The locations that the multiplayer mode will venture to are:

6. There Won’t Be Any Torture Sequences This Time Around, But There Will Be Interrogations

Kotaku spoke with the game’s creative director Maxime Béland and got some information on whether or not Blacklist will include interactive torture sequences:

No, there will not be interactive torture in Blacklist. On Conviction, we called those ‘interrogations,’ right? And it was kind of, my vision of Conviction was that the player to be in control all the time. Even when you weren’t in control, I wanted you to feel like you were in control. We had no camera cuts, I always wanted to make it feel that it was nonstop. And so the interrogations were a bit like that, you know, a way that the story moves forward, that Sam gets the information that he wants.

We’re doing certain things with interrogation moments where you won’t be in control, but you will be in control of what you do with the guy after. So again, embracing that lethal/nonlethal side. After certain moments in the game, you’re going to decide whether you’re taking the guy out or not.

7. There Will Be Different Play Styles That Suit All Types of Players

Three different playstyles (Ghost, Panther and Assault) will give players a variety of ways to tackle the game’s many missions. Lead game designer Laurent Malville spoke to Spong about the development team’s process for creating these methods of play:

The big thing we realized when working on these play styles was that, if a player could use Assault and go out there guns blazing with no consequences, why would they try the other ones? So we have to challenge each play style equally. With Assault, you can go on all-out attack, buy gadgets and armor, but you still need to play it smart. You need to take cover and move positions often because the enemy is going to find you – and throw grenades to get you to move if they can’t reach you.

8. An iOS Tie-In Game Has Already Been Released

A special tie-in mobile game, Splinter Cell: Blacklist – Spider-Bot, has already been released for the iOS platforms. This companion app puts players in control of one of Sam Fisher’s most reliable gadgets as they make their way across high-security levels. This iOS title will unlock additional features on the console/PC versions of Blacklist.

9. The Game is Now Up for Pre-Purchase on Steam

Joystiq made sure to alert Valve Steam members about the pre-purchase option for the game:

Splinter Cell: Blacklist is available on Steam in both standard and deluxe editions. Pre-ordering either will net the Upper Echelon DLC pack, which includes an additional co-op mission, special suit that ups weapon defense and stealth in shadows, plus some gold sonar goggles. If you sign on for the deluxe edition, you’ll immediately unlock a copy of Splinter Cell: Conviction on top of five custom suits, weapons and armor accessories.

10. A Paladin Collector’s Edition is Being Offered as the Game’s Limited Edition

Ubisoft’s new title is set for release on the Xbox 360, PS3, Wii U and PC platforms. Ubisoft’s Shanghai development studio is working on the Wii U version of the game. Below are the official release dates for the game in various regions:

VG247.com posted up some details on the other special editions of the game:

1. The 5th Freedom Edition (Exclusive to Game in the UK and Gamestop in Ireland):

This edition is exclusive to Uplay® and includes:

4. Upper Echelon Day 1 Edition (Exclusive to Game in the UK and Xtravision in Ireland) 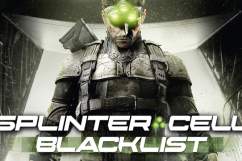