Capcom made sure to show up to New York Comic-Con 2013 and show off their upcoming line of games. The one title that always seemed to host a line of eager gamers was the reboot of Capcom’s super ninja – Strider.

I waited (and waited some more…), but it was all well worth it since I got to have some extended demo time with Strider’s re-imagining.

I came away satisfied after my 20 minute playtime. Here’s what you need to know about the 2014 release of Strider.

1. It’s Metroidvania Gameplay at its Finest

Moving around Strider’s 3D world places players in the familiar realm of Metroidvania gameplay. You’ll control Strider Hiryu as he makes his trough an enemy base that’s ripe for dedicated exploration. The mini-map shows you where you’re heading, so this helps during those moments of “Now where am I supposed to go?”

There’s hidden rooms that you can smash and enter through, walls that you can climb up and leap off of and connecting hallways that lead to new sections of the overall map. This Strider is way more open and ready for players who like to search every nook and cranny of the game world.

2. There’s Plenty of Upgrades Hidden Around

Remember those hidden rooms I mentioned before? Seeking them out will be one of your priorities when you finally get the chance to play this game. Standard powerup’s, such as increased health and Cypher (Strider’s blade) upgrades can be located all over the place. Eventually, you’ll come across primary upgrades that open up the map a bit more.

Strider’s sliding attack can damage enemies, but it can also be used to smash through vents (where other upgrades lie). Getting the move that helps Strider reflect attacks helps him enter a new section once he knocks back the projectiles being fired at him. Making Strider even better is the name of the game this time around.

For anyone who’s played Strider’s past games, it’s easy to note just how fast he is. After using him in all those Capcom Vs. fighting games, I’m happy to report that his fluid movement and quick sword strikes feel just as fast. Speedrunners will probably appreciate this game’s sense of speed and non-stop movement.

It’s quite easy to just move from right to left and mash the attack button as you slice through hapless enemies. The slide maneuver adds an extra wrinkle to Strider’s movement and attack game, too. Remember that air combo starter that Strider uses in his fighting game cameos? That move is also available here.

It’s not entirely difficult for Strider to look so damn cool. With this rebirth of the franchise comes a fresh take on his character design. Strider retains the purple getup/red scarf look seen in his second game back on the PSone.

His flowing scarf billows in the wind as he enters into his crouching run. His jump animation hasn’t changed (thankfully!), plus his climbing mechanics (moving up and down a wall with his hook in tow while his knee is pointed in one direction) is back as well.

5. There Are Definitely Nods to the Strider’s History

As soon as you take off from Strider’s flying gear, the familiarity of this series comes front and center. As a matter of fact, my sense of Strider nostalgia flushed over me when I hit the Start button and hear the infamous evil cackle from the Grandmaster Meio himself.

The main tune from the first game also gets featured with a nice remixed approach with this release. What’s old feels, looks and sounds new again. Fans of the series will undoubtedly be pleased with this game’s attention to past greatness. 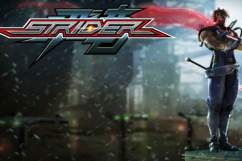