The nerds and geeks are soon going to make their way into New York City. Why? Because it’s that time of year again. New York Comic Con 2013 is going to take over the Jacob Javits Center, starting October 10th and ending (sadly…) on Oct. 13th.

We want to make sure that everyone makes the most of their time at this massive event. Especially those dedicated video game heads out there. The presence of video games at this year’s NYCC is going to be as strong and plentiful as ever. The video game panels that will be on hand will provide the extra info and surprises on the video game topics that matter.

These are the top 10 video game panels you need to attend at NYCC 2013.

1. IGN Presents: Xbox One, PS4, and the Future of Gaming

The gaming experts at IGN will engage in a panel that’s all about the future of gaming and the next-gen consoles that will come along with it. Everyone’s invited to display their fanboyism and engage in some heated discussion about which next-gen system will prevail. A few special guests are planning to attend, so make sure you’re there for the festivities.

The Dark Knight’s upcoming video game release from Warner Bros. Interactive Entertainment and WB Games Montreal is coming to NYCC 2013. Video game producer Eric Holmes, plus actors Roger Craig Smith and Troy Baker will be on hand to present some new info on the game. If you’re not gonna be at NYCC, then make sure you watch the live stream. YOU WON’T WANNA MISS SOME NEW BATMAN!

3. IGN Podcast Beyond Live: Is the PS4 Going to Suck?

IGN’s Greg Miller and Colin Monarty are gonna head up a live IGN podcast this year at NYCC. The topic? Sony’s next-gen console and whether or not it will be as good as Sony’s making it out to be. Sony fans and even non-Sony fans are free to come, sit down and join in on the conversation.

So GTA 5 has finally released and plenty of gamers are wasting hours in the digital landscape known as Los Santos. The three main characters in the game will be showing up in their real-life forms to speak with their newfound fans. If you’ve been dying to meet Michael (Ned Luke), Trevor (Steven Ogg) and Franklin (Shawn Fonteno), then you’re in luck.

5. A Look at The Legend of Zelda: A Link Between Worlds with Eiji Aonuma

Eiji Aonuma, the current producer behind the upcoming 3DS release The Legend of Zelda: A Link Between Two Worlds, will have a public panel session. For those advent followers out there of Nintendo’s hero in a green get-up, this is the event you’ll need to hit up. By the way, this portable adventure hits stores and the 3DS on November 22, 2013.

7. SimCity and The Sims: Designing for the Future

The creative devs behind The Sims 3 Into The Future and SimCity Cities of Tomorrow expansion pack are going to be in attendance, too. Each developer will give their insight on everything ranging from creating futuristic games to delving into themes that span the most prevalent elements of pop culture.

8. Recreating an Icon: The Talent Behind Sonic Mobile Games and Top SEGA Franchises

SEGA’s making sure they won’t miss their loyal fanbase at NYCC 2013. Each of the developers from Hardlight Studios and SEGA will arrive and give their thoughts on recreating the most famous blue hedgehog for mobile/console devices. The audience that’s sure to be present there will have the chance to engage in a Q&A session with the developers. So if you’re itching to talk Sonic with SEGA, then make your presence felt at this panel.

9. Nintendo Communities: StreetPass, Pokemon and Beyond!

The Nintendo 3DS is having a wonderful year. Gamers love to take advantage of its StreetPass connectivity, Pokemon X/Y are arriving on the system soon and plenty of gamers brings them along to Comic-Con events. Social groups that are primarily focused on the 3DS will be on hand to present the future of the 3DS and Pokemon social technology. 3DS and Pokemon fans have something awesome to do on Saturday!

The Tales of… RPG series has an ardent fan base in Japan and right here in the States. Series producer Hideo Baba will be on hand to speak on some of the newest entries in the series (Tales of Xillia 2 and Tales of Symphonia Chronicles). Cosplayers need to pay special attention to this event since they’ll have the chance to do a group photo-op with Hideo Baba. 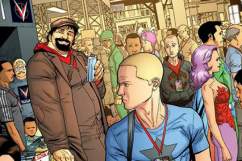