Stephane Roy, the producer of this Thief reboot, spoke with the UK PlayStation blog about the returning mechanic of eavesdropping:

Eavesdropping is still really important. We give a lot of care to support that voyeurism aspect of the franchise, where you can sneak around, listening to what people are saying, looking through keyholes and so on…

We want to make sure that the world is rich and interesting, so our writers are working hard and we’re producing a huge amount of dialog that the player will be able to listen to, as Garrett sneaks through the shadows. Some will give him information for his mission, some will unveil story elements, and others are just fun to listen to.

7. A Special Pre-Order Bonus Level Is Being Offered to Early Adopters

Thief – The Bank Heist Preorder TrailerPreorder Thief now to get the exclusive Bank Heist mission. The Stonemarket First Bank is known to be impregnable… but that's about to change. Test your skills, outsmart new security measures, and retrieve the coveted Star of Auldale. Thief is available for preorder now and will be released on February 25, 2014. To hear more…2013-09-25T11:47:42.000Z

For those who pre-order the game, a special bonus mission will come with your final copy. The video trailer above shows off the loot and other secrets that this bonus bit of gameplay will entail.

8. It’s Launching on Past and Current Generation Consoles

Thief is making its way onto several consoles in 2014. Not only will it be playable on next-gen consoles, but it will also become available on past-gen systems. If you own a PS3, PS4, Xbox 360, Xbox One or a PC gaming machine that can handle it, then you’ll soon be ready to hop up on some rooftops as Garret come February 25, 2014.

The biggest pre-order bonus is actually coming to PC gamers. This “Master Thief” bundle (which can only be purchased through Square Enix’s online store) comes with a wealth of goodies:

3. Booster Pack
– Get access to an exclusive bundle of optional in-game consumables that can empower you and hasten your progression through THIEF:

4. The Bank Heist
– Infiltrate the City’s most secure location, Stonemarket First Bank, to steal a coveted family heirloom called the Star of Auldale. To this day, this heavily guarded and treacherous place remains impregnable, but that’s about to change…

– A challenging mission that will put your thieving skills to the test
– Outsmart security measures found exclusively in this mission
– Search for the Bank’s unique loot and many other secrets
– A true homage to the Bank mission in Thief II: The Metal Age

There may be some spoilers lying around in this online list of achievements/trophies for Thief, no doubt. But if you want a heads up on what needs to be done in order to increase your Gamer Score/Trophy count, then head to this LINK to see the full list. 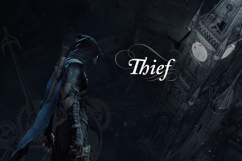