EA Sports UFC is now available for next-gen gamers to enjoy. But are you truly willing to take the plunge and get involved in some digital Octagon beatdowns? To be sure, we’re going to gather up 5 reviews that give away the pro and cons of this sports fighter. Is it a triumph or a disappointment? Check out all the reviews below and find out for yourself!

VideoGamer.com were big fans of the solid mechanics of the overall gameplay. However, they knocked off several points due to the lack of MMA legends on the roster, hard-to-understand ground game mechanics and lack of game modes/customization options:

EA Sports UFC is simply ok when it should have been great. Considering how long it’s been in development, and the breadth of content at EA’s disposal, I can’t help but be disappointed by what’s on offer.

The DualShockers review was very positive, noting that EA Sports UFC is a great fighting game thanks to its wealth of offensive/defensive options and solid career mode. They had a few issues with the game’s graphical hiccups, like the hit detection rate that doesn’t always register:

All in all EA Sports UFC is a great fighting game that embodies the strategy and fighting prowess needed to be an ultimate fighter. The game does a great job making each punch, kick, takedown and submission feel as real as it gets without having to step into a real Octagon. This is a must have for any MMA or UFC fan and a must try for anyone who really wants to learn the sport and understand what it is all about.

EGM.com loved the game’s dynamic fighting system, but they weren’t too enamored with the game’s training system and online lag during player vs. player matches:

The best representation of the action that happens inside the Octagon yet. While it’s not simple, the control scheme is still easy enough to learn that it takes the experience to an entirely new level as you break your opponents down standing up, in the clinch, or on the mat. With outstanding next-gen visuals, EA Sports UFC is good enough to carry around a championship belt.

GamesRadar’s review loved the game’s amazing graphics and attention to detail. They also noted that the game’s fighting system works very well in a multiplayer setting. They didn’t like how easy it was to submit A.I. opponents, the lackluster Career mode and lack of additional gameplay modes:

EA Sports UFC boasts incredibly detailed fighters and great combat. However, this debut effort from a new publisher lacks the single-player balance and the variety of modes that previous UFC games brought to the ring.

Eurogamer.com were fans of the game’s high visual fidelity and fun multiplayer gameplay. They lamented the game for its bare bones package of game modes and somewhat off-putting fighting game mechanics:

EA Sports UFC is a game capable of brilliance. It’s let down by some curious design decisions, signs of a team perhaps too interested in capturing non-essential moves seen on YouTube rather than nailing the essence of the sport. But when it flows against human competition, it offers beautiful destruction and glorious drama. Landing a picture-perfect head kick in the final minute of the fifth round of a title fight? Well, it doesn’t get much better. And if that’s not worth a fistbump, I don’t know what is. 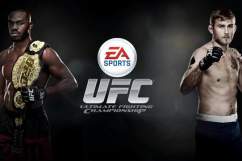