During Volition’s PAX Prime 2014 fan panel, the dev revealed some big news and some hilarious footage for planned future content for Saints Row IV. A new standalone DLC expansion is on its way for the game and it gives fans a chance to play with Johnny Gat and Kinzie Kensington. Their mission entails rescuing the Saints gang’s boss and taking on Satan himself.

This DLC expansion’s premise is off the wall but par for the course for Saints Row – a fun round of Ouija goes horribly wrong and places the leader of the Saints gang in the clutches of Satan. Now that he’s in Hell, he’s being forced to marry the devil’s daughter, Jezebel. Johnny Gat and Kinzie Kensington can be controlled separately or used together in online cop-op as they look to save the big boss man.

Check out the brand new trailer for this exciting dose of Saints Row IV DLC.

This new dose of DLC is launching on January 27, 2015 across the Xbox One, Xbox 360, PS4, PS3 and PC gaming platforms. As for the Xbox One and PS4 versions of the game and it’s DLC, it will be released in a new version called Saints Row 4: Re-Elected. This full edition of the game for current-gen consoles will come with all the previous DLC as well as the “Gat Out of Hell” expansion. The DLC will cost $30 on its own, while the Re-Elected edition will sell for $50. 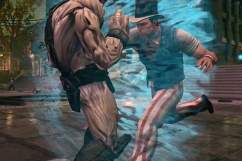 REVIEW: ‘Saints Row 4′ is an Elaborately Designed Spectacle of Fun