Capcom knows where its bread is buttered these days. The digital release of the remastered Resident Evil was a resounding success, which is why the video game publisher/developer is releasing more and more re-releases of its classics. The “Blue Bomber” has laid dormant within Capcom’s archives for far too long. The threat of Mighty No. 9 may have caused them to finally give Mega Man the attention his fans have cried out for since his last two 8-bit entries. With the Mega Man Legacy Collection, loyal followers of the fighting robot can play out his original adventures on modern consoles. However, this compilation pales in comparison to a past gathering of Mega Man’s classic titles.

First things first – Mega Man’s very 1st game right on down to his 6th game is a retro roadtrip worth traveling down again. The punishing gameplay may deter those who’ve never ventured into his robot master filled universe, but learning how to handle its many challenges is a treat. The 8-bit visuals have garnered a welcome HD shine job, which makes each title look better than its original incarnations. This collection does a great job of getting everyone up to speed on each title thanks to the Museum Mode. There exists tons of production art, character files, concept art and promo pics for every game, so the nostalgia high you’ll experience here is worth revisiting.

The two additional extras you’ll appreciate comes in the form of a boss database and challenge mode. There’s no need to remember which acquired weapons are powerful against which boss now that the in-game database is there to tell you all that info. Not only does it cover the major robot masters, it also provides tips on how to counter the game’s normal enemies. Speed runners should find a ton of fun within this collection’s challenge mode, which comes packed with beginner friendly trials to expert level tests. Beating each one and topping the leaderboards is the main factor that will push you to keep replaying them, even after many repeated deaths.

While there’s a lot of good content within this collection, its truly not the most comprehensive compilation for the “Blue Bomber.” It’s hard to recommend this digital-only release when there already exists a better one – the physical Mega Man Anniversary Collection. That collection not only comes with the 1st eight games in the series, it also gives you two extra games and plenty more bonus content. The true disappointment for the Mega Man Legacy Collection comes from the fact that Mega Man 9 and Mega Man 10 are both missing from it entirely. For a collection that’s meant to honor Mega Man’s 8-bit history, the exclusion of these two games is a confusing move on Capcom’s part.

Mega Man Legacy Collection is a nice love letter to Capcom’s iconic blue savior. The 1st six games still provide hours of entertainment, plus fans new to the series will love having plenty of background content within each title to educate them. However, there’s not enough here to warrant its purchase. There already exists a much better collection and it exists on consoles that are two generations behind the current one. Get it if you’re truly dying for Mega Man on your modern consoles. Avoid it if you’re looking for something more worthwhile from Mega Man’s historic 8-bit run. 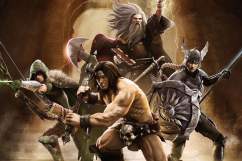