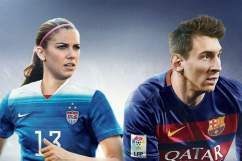 FIFA 16 knows just how important this year’s race to the top is. With Konami’s PES 2016 breathing down its neck, now’s the time for EA Sports’ soccer series to push itself even further to greatness. The majority of this soccer sim’s positive aspects come from the sum of its parts rather than its entire package. While this year’s FIFA doesn’t do anything truly groundbreaking, it’s still an enjoyable entry for everyone involved.

New additions to FIFA 16 offers players new ways to play. The female fanbase can very much look forward to the 12 new teams consisting of women’s national players. This brings the game’s entire league/team count to an amazing level, so every player (male and female) that is your fave should be present. Another new mode that does more to keep you hooked is the FIFA Ultimate Team Draft Mode. Similar to Madden 16’s Draft Champions mode, you’ll get to build your team from a random selection of five players. Properly setting up your team leader and player positions is an activity built for beginner and expert players alike. The majority of fun that comes from this mode is the increasing difficulty of the four proceeding games your drafted team plays and the rewards that come from being victorious.

Career Mode honors its ardent fanbase by adding two features they’ve requested for the longest – pre-season tournaments and player training. Your team now has an even easier time developing into the championship caliber squad you want it to be. Your players can dabble in pre-season games to get their team synergy tighter and keep your custom player busy. The option to play or simulate the training of different skills for any player on your team helps gradually increase their play on the field and keeps everyone on a level playing field skills-wise.

EA Sports realizes that the game of soccer features some of the more epic moments of any sport. Deeper player tricks such as dynamic crossing, no touch dribbling and clinical finishing create more opportunities for those moments (“Moments of Magic”). Each of these control mechanics are expert level maneuvers that, when mastered over time, will result in the type of occasions that mimic the incomparable excitement of soccer. The offensive game doesn’t truly evolve as much as you may have wanted, but it still has some new features that maintain its solid nature.

Th defensive game has been improved in several areas, such as better goalkeeping, new tackles, teammates with a better response time to offensive plays and faster mobility. When combined with the changes made to the offensive play, the on-field play as a whole stays constant and fun. FIFA 16 may be better than last year’s installment, but a few hiccups here and there bring it down a notch. The physics systems displays some awkward moments at times, such as body parts mashing together at weird angles and shot dribbles that come off entirely wrong. While the player A.I. is stronger than ever, random issues pop from time to time (your players may not respond as fast as you want them to when the ball is loose).

FIFA 16 keeps its series’ solid base intact and adds more modes to keep its fanbase pleased. Playing with Women’s National Teams across a wealth of modes and participating in the construction of custom teams in FUT Draft Mode are both standouts. The alterations made to Career Mode also do a better job of helping your players improve at a manageable level. The offensive and defensive game receives a few changes here and there, but it doesn’t truly evolve beyond its annual gameplay mechanics. The random issues that arise can be problematic, but they won’t deter you from staying within the entertaining confines of FIFA 16.