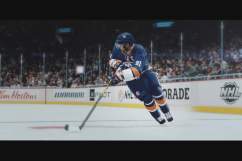 ‘NHL 16’ Review: Returning to the Ice in Solid Form

The EA Sports brand (remember – its in the game!) is ready to unleash their 2016 installments of popular sports simulators. Hockey fans should be quite pleased since NHL 16’s release is right around the corner.

Longtime series developer EA Canada has gone full steam ahead when it comes to polishing its upcoming release. An old feature taken out of NHL 15 is making its return, the multiplayer components are more plentiful and the gameplay is being refined for the better. Skating across the ice will look and feel better now that NHL 16 is shaping up to be one of the finest sports games of 2015.

Hit the ice with all the info you need to know about EA’s next foray into digital hockey.

1. A Chicago Blackhawks Player Has Been Tapped as NHL 16’s Cover Athlete

Last year’s NHL 15 cover athlete (Patrice Bergeron of the Boston Bruins) was chosen and given the honor through a fan vote. NHL 16’s cover star selection was actually announced at the 2015 NHL Awards. At first, two hockey stars were picked to don the cover – Patrick Kane and Jonathan Toews of the Chicago Blackhawks, two members of the championship team that captured the 2015 Stanley Cup Finals.

This hockey athlete duo cover was supposed to be Patrick Kane’s 2nd appearance on the front of an NHL game (he appeared on the cover of NHL 10). Due to Kane’s current legal matters circulating around a sexual assault allegation, EA Sports chose to take him off the cover and let Jonathan Toews be the main box art star. Toews has actually been on the cover of an NHL game before (NHL 11).

2. The EA Sports Hockey League (EASHL) Will Be Making Its Return to The Next-Gen Versions

Many NHL video game fans were disappointed to see that the EA Sports Hockey League (EASHL) mode was completely missing from last year’s installment. NHL 16 is bringing it back for those who missed its addictive online multiplayer mechanics. EASHL allows individual players to go online, team up with fellow players and compete with their custom characters in a team format.

This mode marks the welcome return of 6v6 online matches, online couch co-op and the ability to choose one’s team name and jersey. The biggest change to EASHL is the introduction of players based around specific play styles. Customized players can be built to be playmakers, grinders, power forwards, danglers, offensive defensemen, danglers and many other hockey position types. Team synergy is important in EASHL and you’ll need to help your team to climb up the online leaderboards.

3. A Brand New Training Tool Will Be Included to Bring Newcomers Up to Speed

For those who’re playing an NHL game for the 1st time (or for those who need a refresher on proper hockey play), NHL 16 will be debuting a visual training tool. This option makes sure to aid you on the ice and give you the tools needed to improve your game over time. The game will support your playtime by showing you who’s open for puck passes, your current shooting targets, perfect passing lanes and more.

4. Be a GM and Be a Pro Mode are Making Their Return

NHL 16 is making sure to bring back two popular modes – Be a GM and Be a Pro mode. Once again, Be a GM mode puts you into the lead position of a hockey team general manager. You’ll be tasked with managing your NHL and AHL team players, dealing with their overall morale and doing even more to improve your franchise’s on-ice performance. From time to time, you may have to confront your more displeased players in one-on-one meetings. Player morale is the biggest change coming to Be a GM mode this year.

If you’re more prone to having fun developing your own NHL player, Be a Pro mode is where your focus will be. Your player will have to make his way up from the rookie leagues of the CHL all way up to the NHL big leagues to cement their legacy. You’ll be able to simulate your next shift once again, plus the new performance-based progression system will make your player better thanks to their on-ice skills. For instance, your player will improve in the area of blocking shots if he does it regularly.

On the NHL 16 purchase front, you can go ahead and pick up the Standard edition or the much lauded Deluxe Edition. Dropping down some pre-order bucks for the Standard Edition will grant you $15 worth of Hockey Ultimate Team goodies. The Deluxe Edition of the game will bring you even more Hockey Ultimate Team value, since you’ll acquire $50 worth of additional bonuses.

If you still haven’t made the jump to current-gen consoles, EA Sports will still satisfy your hockey simulation needs. Both the Xbox 360 and PS3 will receive NHL Legacy Edition on the same day as the release of NHL 16. The last-gen version will combine the most fan friendly modes and gameplay features that have come to define NHL from the past nine years of its run. The roster will be completely up to date, plus the in-game schedules will replicate the events of the current NHL season.

Be a Pro mode, Be a GM mode and eight playable hockey leagues (the NHL, AHL, CHL, Liiga, SHL, DEL, Extraliga ledniho hokeje and National League) will be among the finest features seen in NHL Legacy Edition. Going ahead and pre-ordering this last-gen incarnation of EA’s hockey sim will bring gamers $15 worth of Hockey Ultimate Team content.