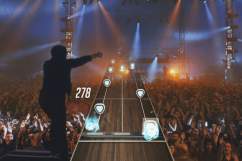 Music peripheral games have had their fires reignited for 2015. Activision knows just how much of a player its Guitar Hero franchise used to be. Now they’re ready to rebuild its importance within the current gaming landscape. In order to freshen up a well-worn formula that fans are used to, developer FreeStyleGames has opted to ditch the cartoony backgrounds and color-coded note pathways of series past. Guitar Hero Live seeks to innovate in several areas, but microtransaction issues and a weak song playlist keeps this release from being truly being a smash hit.

With a new game comes a more realistic approach to playable guitars. Gone are the days of multicolored buttons. Now players have to ditch everything they remember about their past masterful approach to playing. The new guitar comes with a fresh setup that relies on two rows of three buttons, which are represented on screen by dark/grey notes. It may take a few songs for you to become in tune with this new playstyle, but it becomes 2nd nature soon enough. It feels as if you’re really playing out the exact chords presented to you onscreen. Two more players can join you for live play sessions with an extra guitar and mic, while the drum and bass options are missing. These aren’t huge blemishes on the overall product since this release has more of a focus on 1st-person viewpoints for guitar players.

The new Live mode does away with the animated avatars rocking out onstage and puts you in front of an actual crowd. The roaring fans now react in tune to how good or bad you’re really playing, so now you’ll really feel the pressure during each performance. Moving through the concert circuit means you’ll have to back up all types of bands that specialize in various genres. It feels immensely gratifying when the crowd sings along to you and your cover band. It’s also hilarious to see “YOU SUCK!” sings and red plastic cups come your way as you butcher a song. This new way of playing pushes Guitar Hero forward and sucks you into the experience even more.

The other major feature of Guitar Hero Live is the implementation of playable music videos. Making your way through a massive catalog of tunes based on specific genre channels is fun, but it’s hampered by a few issues. Time after time, you’ll look to play certain streaming channels but you’ll be forced to wait for them as other current channels are up for play. The option is there to play through a smorgasbord of music videos/live shows. Hopping into these songs without having to wait for them during streamed schedules is a nice touch. Only problem is the microtransaction methods needed to make good use of that huge playable library. Tokens come in good quantity when you first start out in this mode, but if you’re not willing to spend more cash for tokens you’ll soon run out of material to play.

Any music game worth its weight must feature a high quality soundtrack. Guitar Hero Live takes a dip in quality for this most important feature. Most of the playlist focuses on more modern acts. There’s a severe lack of truly classic rock, metal and folk songs in Live Mode. The Top 20 feel of this entry’s playlist has a few standouts (Green Day’s “American Idiot” and System of a Down’s “Chop Suey,” for instance). But there’s far too many weaker tunes to play along too during Live mode, plus some of the better tunes may have to be bought during GHTV mode. You won’t get to permanently own any songs you obtain in GHTV, which is a strange design decision.

FreeStyleGames’ evolution of the Guitar Hero series is great in some parts. Playing in front of a live crowd during concert set’s feels, looks and sounds amazing. The added stress of the rambunctious crowd’s reactions forces you to play at the best of your ability. GHTV’s use of playable music videos is A neat idea as well. This part of the evolution process is limited by its channel schedule and over reliance on microstransactions, though. The game’s entire soundtrack could be a lot better as well. Nevertheless, the longtime joy of Guitar Hero is still evident in this live rebirth. 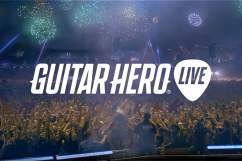