Children of the 90’s know just how passionate two particular fan groups used to be. There were those who lived and died by Nintendo’s Pokemon phenomenon. And then there were the followers of those fully talking, cute and cuddly Digimon. While the Digimon franchise has had to suffer in the world of gaming due to incredibly average releases, Bandai Namco and Media.Vision have sought out to repair the damage done by such quick cash-in’s. Digimon Story: Cyber Sleuth has emerged as a surprisingly splendid JRPG for fans of those lovable Digimon.

In the world of Digimon Story: Cyber Sleuth, your main character – male of female – becomes a part of a major mystery. After landing within a digital world, you venture into one of its darkest areas and receive the power to partner up with Digimon. Everything soon goes haywire once you become an official “Cyber Sleuth” and become the assistant of a very personable detective agency owner. A massive company by the name of Kamishiro has had to deal with a digital virus called Eden Syndrome, which has led to them trying to cover up this sickness and put the public at ease. Your living body becomes stricken by this new disease and it’s up to you to figure out the cause of this virus and what else is occurring between the real and digital worlds. The plot is a lot more serious than expected, but there’s a good amount of humorous moments strewn throughout that lighten up the mood. The story’s stakes raise higher and higher as you play through each chapter, so you’ll be determined to solve the major case in the end.

Your focus is on solving not only the main case at hand, but a wealth of minor ones as well. Taking on these smaller side quests usually task you with facing off with other hackers in Digimon battles or taking on other minimal tasks. On the Digimon side of things, fans of the Pokemon way of doing things will love what’s applied there. You’ll scan and fully digitize those furry critters and soon train, battle with and upgrade them. For fans of the earlier seasons of Digimon, feelings of immense nostalgia will wash over you once you add Agumon or Gatomon to your ranks. The total roster of Digimon you can collect crosses over into the hundreds, so you’ll have a great time putting them to work in battle and improving them within your DigiFarm. 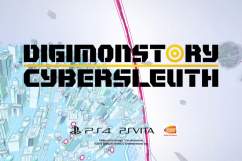 The battle sequences you’ll engage in abide by the old-school “pick your skill and wait your turn” mechanic gamers are used to. One of the more modern changes to that system that this game utilizes is the character turn notification bar, which lets you know who’s up next to pull off their next action. You’ll have to pay attention to this sidebar since it notifies you when you’re capable of pulling off a tandem attack. The battles themselves are simple to understand and fun to watch unfold due to the super flashy attacks from the more powerful Digimon. But there’s one retro RPG mechanic in this game that didn’t need to be return – random battles. As you run around each digital dungeon, you won’t be able to see your enemies. Hopping into numerous fights as you’re exploring happens on the regular, which is kind of an annoyance when you’re just trying to explore each area. The overall experience of this JRPG would be much better off if you were able to spot your foes beforehand and have the choice to avoid fights altogether.

Moving around within the real world is a treat, especially for those who’ve spent some time in Japan. All of the environments seen in this game are based on actual locales seen in Japan, such as the multi-floor malls and the exciting Shinjuku district. The bright and bubbly feel of the game’s world meshes well with the monster collecting/battling themes seen in the comparable Pokemon games. The Digimon themselves are easily the best animated elements of the game. Their intricate and grand designs fully come to fruition and look even better than their cartoon doppelgangers. The human character models don’t look quite as great, though. The major characters look decent enough, but many of the NPC’s aren’t as visually impressive as everyone else. This is more of a minor quibble though.

There was a great amount of hype surrounding Digimon Story: Cyber Sleuth before it’s American launch. After spending some time with it, this reviewer feels that the hype was well warranted. Sony console gamers finally have a competent monster collecting/battling game to call their own. It’s simply addictive to amass new Digimon over time and build them up into a formidable party. The strong plot will push you along at a great pace, plus the funnier parts of each chapter thankfully breaks up the serious mood. Not having the ability to avoid random battles at times by seeing your enemies on the map is a letdown, plus several of the human character models don’t look quite as good visually. This JRPG is still a good attempt at placing the Digimon within a serviceable monster battler.

‘Digimon Story: Cyber Sleuth’: The Screenshots You Need to See