CyberConnect2 has worked extensively with the Ultimate Ninja Storm series. Ever since its arrival on the PS3, Naruto’s playable adventures have gradually gotten better. The time has finally come for Naruto and his massive lineup of fellow ninjas to bring their tale to a close in epic form. Naruto Shippuden: Ultimate Ninja Storm 4 heads off into the sunset with everything fans have loved about the series and also provides non-fans with a competent anime fighter.

It should come as no surprise that this final installment looks even more incredible than its predecessors. This is the first Ultimate Ninja Storm release to be fully developed for current-gen consoles and it shows. The opening FMV is proof of just how close to the anime this game’s graphics are. Once you set foot onto the battlefield, the visuals truly bring the shinobi battle royals to life. Each character and their many variations mimic the anime source material perfectly, plus the Ultimate Jutsu animations are simply jaw dropping. Once you take part in the Story Mode’s massive boss battles, you’ll truly get a sense of just how amazing this fighter looks.

While the actual fighting mechanics behind the game still relies on simple one-button combo strings, new system adjustments have been added to deepen this fighter’s potential. Characters can now get their armor/weapons broken, which means you’ll now have to pay close attention to your ninja’s defense over time. Fights can now involve 3v3 team battles, which allow you to switch out your leading character and also let you pull off devastating team Ultimate Jutsu’s. Other new mechanics, such as both fighters being able to wall run and elemental damage adds even more to the game’s developed formula. Thanks to the incredibly varied and large roster, there’s plenty of opportunities to mix and match your favorite characters and battle within the game’s many modes. 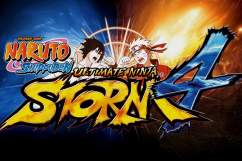 Ultimate Ninja Storm 4’s plot follows the events that came to a close in the last release. This time, you’ll forgo the open world travel format and instead watch story chapters before each important battle. While these cutscenes do look beautiful and offer fans a refresher on the final events of Naruto Shippuden, they tend to run too long. You’ll be doing more watching than actual playing, so be prepared to sit through 5-6 minute long cutscenes every time you take on another chapter. This would be less of an issue if there were more movies to sit through instead of still images with voiceovers in the background. When you finally do get to the battle at hand, you’ll be thankful to finally have something to actively participate in. The new Adventure Mode is separate from the Story Mode, which offers up an enjoyable side venture for those who loved it from past entries. Fans of the Japanese voiceovers will definitely want to go with that option in both modes. The English voiceovers don’t mesh very well with the lip-synching most of the time.

The content that comes with Ultimate Ninja Storm 4 is plentiful. There’s tons of collectibles to attain, all manners of online multiplayer modes, new characters to unlock etc. With this game being the last release within the series, it’s easy to see that CyberConnect2 wanted to go out with a bang. With more DLC on the way, Ultimate Ninja Storm 4 should hold Naruto fans over until the next evolution of these games arrive.

Naruto Shippuden: Ultimate Ninja Storm 4 sends the long-running series out on a high note. The massive offering of recognizable characters should satisfy hardcore fans and the improved battle mechanics are now at its absolute best. On the visual front, everything looks delightful. The boss fights’ cinematic endings will most certainly have you in awe every time. The Story Mode format falters due to the overly long cutscenes, plus the use of still images throughout most chapters are boring to watch. The lip-synching could be a lot better, as well. Those nagging issues may be prevalent, but the pros behind this anime fighter manage to make it enjoyable after all.