Quantum Break is one of our top games to play in April.

When it comes to hearing about video games having live-action trailers or live-action miniseries, I’m typically unable to control the eye-rolling and scoffing. After all, we’ve seen so many cringe-worthy attempts at mixing video games and TV before (especially looking at you, Defiance). Now, here we are in 2016 with yet another “video game/TV series hybrid,” despite all of the past results suggesting that creating one is a bad idea. But does Quantum Break bend the rules of video game-television mash-ups like it bends time in-game, or should it be considered another awful attempt?

At its core, Quantum Break is a good game. It’s really that simple. It doesn’t go above and beyond in its gameplay, but it instead, disguises itself as a time-altering action game while, at its core, it’s really a 3rd-person cover shooter. Admittedly, those cover mechanics work well, the gunplay is well-done, and there is a variety of choices in ways to take down a room full of foes.

Your character acquires time-altering abilities that all add another layer to what would otherwise be nothing more than a solid shooter, and using these powers is a hell of a lot of fun. You can stop time, slow down time, create a sort of time shield to prevent damage, rewind the timeline of certain objects, and you can zoom around the room, dismantling enemies tactically and, for the most part, without having to worry about dying in the process. That’s not to say that Quantum Break is too easy, but these powers do make the protagonist feel overpowered.

While these mechanics in the game are enough to keep the player amused, it’s the story that makes Quantum Break a surprising stand-out. The player is immediately drawn into a story filled with deception, betrayal, and best of all, time travel elements, and the game itself is expertly paced, taking time to allow protagonists to interact in the world while allowing enough time for players to take in all of the surroundings to immerse themselves in that world.

As far as how it looks and its graphical fidelity, don’t buy-in to the “oh no, it’s only 900p” or whatever the actual resolution of the game actually is. The majority of the game is played with a heavy film grain, which actually makes sense in the story. Basically, it looks awesome. The world is fully realized, and you’ll easily find yourself immersed in it.

The cast, of course, puts on TV-worthy performances, as should be expected from the likes of Aidan Gillen and Shawn Ashmore. While in-engine, I was amazed at how realistic their characters looked when compared to the actors behind them; Ashmore looks like Ashmore, and GIllen looks like Gillen. But the problem arises when the player is taken out of the game world, right at a point when they’re on the edge of their seat, for a live-action TV episode. It’s not that the TV episodes are bad — they’re not — but when the in-game story was working so well, I couldn’t help but wonder why I was taken out of the experience to experience something that felt, well, frivolous at that point. Still, it is necessary to watch these episodes to fully takeaway the understanding of what’s going on in Quantum Break, even if we wish that it was all rendered in-game, instead.

Luckily, the game as a whole is a gratifying experience that Xbox One gamers should play through. And with a story that is at least on par with Alan Wake and the Max Payne series, Quantum Break is another example of why Remedy should be considered among the best storytellers in the industry. Come for the time-controlling gameplay, stay for the story. 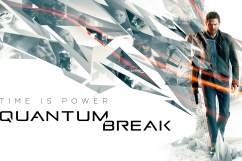