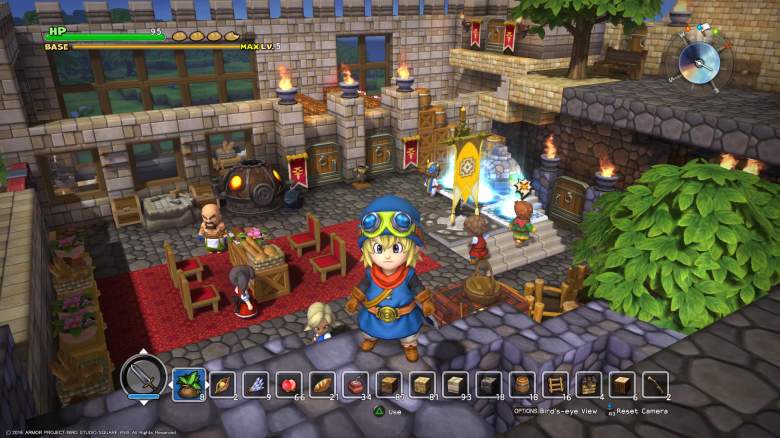 The Dragon Quest series, which has long been a national obsession in Japan (more popular, even, than Final Fantasy), is beginning to gain traction in the Western world. Dragon Quest Builders is an upcoming sandbox action RPG set in Alefgard, the world of the first Dragon Quest game, and is based on an alternate ending in which the Hero accepted the Dragonlord’s offer to rule half of the world. Of course, it was a trap, and now Alefgard is in ruins, its citizens robbed of the ability to create; so it falls on you, the Legendary Builder, to rebuild Alefgard and defeat the evil Dragonlord. It’s gotten rave reviews since its Japanese release in February and will be released in North America and Europe next month. The game has naturally drawn many comparisons to certain other iconic sandbox games, but it’s far more than a Dragon Quest-skinned Minecraft, and is perfect for those who prefer a much more guided and story-driven approach to gathering, crafting, and building.

You can play as either a male or female Builder and customize them to a limited extent, as well as change their appearance at any time. Landscapes and buildings have a blocky structure similar to Minecraft, but the textures are much smoother and the graphics are more detailed. The art style is similar to the core Dragon Quest series; in other words, colorful, vibrant, and utterly charming. The remastered soundtrack is taken directly from the earlier games and remains as enchanting as ever. Fans of the series will find many familiar elements such as enemies and items, but knowledge of the series is certainly not a prerequisite for enjoyment.

Already, the sheer volume of the game and amount of things to do is highly impressive. When initially writing this review, I had easily logged over 30 hours and was still in the second chapter (of four). For expediency’s sake I haven’t explored every nook and cranny or completed all the bonus objectives, but a completionist playthrough could easily take over 100 hours. The game includes a wide variety of environments and enemies, large islands to explore complete with caves and dungeons, and activities such as cooking and fishing. The amount of recipes, materials, and items seems endless, making it one of the most addictive games I’ve ever played. 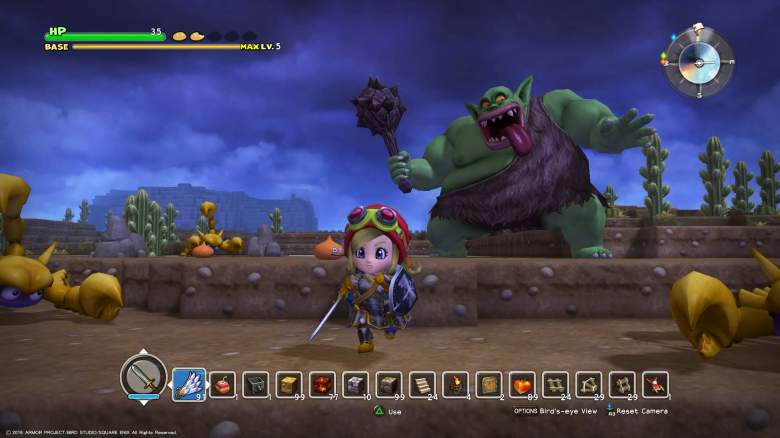 Combat is smooth but highly simplistic thus far and doesn’t really reward you except with crafting material drops. There’s no experience points or character level; the only way to power up is by acquiring progressively better recipes for armor and weapons or eating a seed of life to raise your HP. There’s no special moves/spells apart from a spin move that you can charge by holding the button (similar to Zelda), which can be used for combat or gathering. There’s no locking onto enemies or blocking/dodging mechanics, so it’s hard to avoid taking damage; you can see when enemies are charging an attack, however, so you’re able to strategically retreat. There are some instanced battles, too, where waves of enemies attack your settlement and you can set up defenses and traps to hamper them, which definitely adds an interesting element.

As previously mentioned, the game is divided into four chapters, each of which is treated as a separate entity with its own save file, so you can go back to a previous chapter at any point in time. You start almost from scratch at the beginning of each chapter; your inventory does not carry over, all HP gained is lost, and you must now rebuild an entirely new area from the ground up. Some of your recipes are retained, however. Each chapter has its own focus and overarching goal, with a different set of characters, environments, and enemies; there are also limitations that present new challenges, and require you to work around, say, a lack of a particular material. In addition to this, you continually learn new recipes and techniques, encounter different materials, and obtain new room recipes and blueprints, so the gameplay never feels repetitive, and starting a new chapter isn’t as aggravating as you might expect. As you rebuild each settlement, citizens will flock to it and offer you quests, for which they will reward you with building materials. The dialogue is delightfully cheesy, and although you never see the Builder’s end of the conversation, you can infer based on the often-humorous reactions of the other characters.

There are a few minor annoyances that mainly revolve around the controls and the camera. It’s difficult to aim precisely when both placing blocks and destroying them. For example, although you can see where a block is going to go, it can be somewhat difficult to get it where you want it; likewise, when trying to destroy one block, you may end up demolishing a whole section. The also applies when monsters are raiding your village, so be sure to pull them well away from your buildings. As for the camera, the third-person POV makes it difficult to navigate enclosed spaces, like when you’re tunneling. You can reset the camera angle, which is mildly helpful, but an option to switch from third to first person would be even better. As previously stated, though, these are only minor issues and don’t really detract much from the overall experience.

If free building is more your style, there is a Terra Incognito mode that is unlocked upon completion of the first chapter and is expanded with the completion of each subsequent chapter. It allows you to build without restrictions and share your creations online.