Just hours before Nintendo is set to make their big NX reveal, this new trailer appeared on their Japanese Youtube channel for The Legend of Zelda: Breath of the Wild. The footage was also posted to the official site, which states that the footage is for the Wii U version, although the game is being developed for both Wii U and Nintendo NX. Maybe they’re saving the NX footage for the reveal later this morning.

The trailer shows off a multitude of different gameplay mechanics, as well as a variety of environments and weather, and it looks absolutely gorgeous.

Keep an eye on Heavy.com for all your gaming news and everything The Legend of Zelda-related. 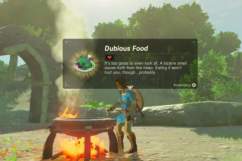