“With great power comes great responsibility.” This old yet still relevant adage can be applied to the royalty now turned outsiders Corvo Attano and Empress Emily Kaldwin. The supernatural abilities they can choose to adopt turns them into dangerous assassins who must do everything in their power to reclaim the throne of the Empire of the Isles. Dishonored 2 arrives with a tightly woven story, more creative stage elements, slicker celestial abilities and the same genius stealth gameplay seen in the original. Arkane Studios has outdone themselves and produced a sequel that builds upon the strong foundation brought on by this fresh franchise.

We’re introduced to a now grown up Emily Kaldwin, who has been forced to take over the ruling duties her assassinated mother once oversaw. Corvo fought hard to eliminate the individuals that were responsible for this unexpected Coup d’état. Fearing that something like that could happen once again, Corvo has gone out of his way to train Emily and turn her into a viable assassin. It turns out that this train of thought was well warranted; a newfound member of the royal family viciously takes the throne away from Emily and paints her and her father as murderers who must be captured and tried. This event gives Corvo and Emily all the reason in the world to adopt spectral powers and take back the throne. Players of the 1st game will get sucked into this sequel’s opening moments and the rest of the unexpected developments within the ongoing story.

The Outsider springs up once more to give you the choice of gaining a suite of paranormal skills. You can choose to reject them, but taking his gift means you’ll become even more of a threat to Corvo/Emily’s enemies. Having the option to play as either character means you’ll gain unique but equally powerful talents. Skulking around each of the game’s wider environments lets you mix up your powers and figure out which ones yield the best results. Corvo can still “Blink” to farther locations, slow down time with “Bend Time” and even summon killer rats with his “Devouring Swarm” ability.

Emily can take longer leaps and pull enemies towards her with “Far Reach,” “Mesmerize” enemies to distract them and send out a clone of herself with “Doppelganger.” Over the course of this tale of revenge, you’ll have the most fun mastering your powers and using them in inventive combinations. You’ll get every opportunity to either go on a killing spree or become a more silent threat. The mechanics at play here never falter. Thank God for the fact that there’s so much to see, do and collect, which means you’re going to spend hours combing every part of Karnaca’s world.

Karnaca is an expansive locale that’s filled with all types of memorable hubs. Your assassin will invade radiant mansions, navigate through seaside towns, brave the dangers present within homes overtaken by bug infestations etc. Each of the stages you’re chosen assassin gets thrown into features some creative mechanics, such as a mechanical manor that’s filled with secret entrances/exits and mechanical threats. While these occurrences are incredible to play through, it’s a bit disappointing to see past elements never pop up the further you go along. It’s best to take your time and explore every part of each stage before you leave its cooler elements behind for good (until your 2nd playthrough as another character, of course). Here’s hoping that the eventual Dishonored 2 sequel combines the best elements of each stage for its character’s continuing crusade.

Dishonored 2 excels in every area that made the 1st game so remarkable. Each of the stages you explore within Karnaca are wondrous locales teeming with meaningful activity and beautiful scenery. Corvo/Emily’s otherworldly ability suite feels empowering and makes you feel like a true menace. Most of the fun produced by this sequel comes from exploring every nook and cranny of a level while choosing the more/less violent method for your main objective. The game’s tale of deception, revenge and redemption is all the more involving thanks to the interesting personalities you encounter. The only letdown that comes to mind is the fact that some of the game’s cooler mechanics are only relegated to a single stage. But don’t let that nitpick deter you from Arkane Studios’ latest triumph. 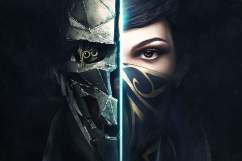