The ever-evolving world of Fate has moved from the world of visual novels into more active genres of gaming. Its execution of combat amongst vigorous Servants has played out in fighting games and RPG’s. Fate/EXTELLA: The Umbral Star adopts the Musou formula this time around for a climactic clash between armies that takes place within a cybernetic land. Marvelous’ latest form of beat ’em up action mashes up with the world of Fate within a solid take on the familiar Dynasty Warriors template.

All you need to know here is that you play the part of a royal subject that oversees the actions of a powerful Servant. After the close of the “Holy Grail War,” your chosen warrior believes that they hold all the power in the land. But everything breaks down and new lines are drawn in the sand when that fact suddenly becomes disputable. The main Story Mode may be a bit confusing for non-Fate followers at first, but everything starts to become a bit more sensible as you follow along with the ongoing war. The massive Glossary does a admirable job of aiding players in remembering all the key terms that come across your screen during the main campaign.

When it’s time to go to war, the fun truly begins. There’s a ton of cool characters who’re capable of wiping out hundreds of soldiers with their varied fighting styles. The roster of Servants you get to choose from can cut down wide swaths of automated enemies with swords, lances or even their bare hands. Like Dynasty Warriors, you’ll pull off devastating combos and rack up a kill counter that tends to max out in the thousands when you complete a mission. The battles play out as struggles for territory control, so you’ll focus on killing enough enemies to gain more power by owning pieces of land. The more flashier attacks come courtesy of super-powered finishers and the type of transformations that you’re used to seeing acted out on your favorite anime. Getting the opportunity to gain new items and develop stronger bonds with allies provides more incentive for players to keep fighting the good fight.

But like most games that rely on the Musou playstyle, Fate/EXTELLA eventually turns into a repetitive process. After wading through lengthy story sequences between each battle, the whole affair turns into a tiresome campaign after mashing your way three/four stages straight. Ultimately, your enjoyment of this brawler wanes unless you take extended breaks from it. Returning to it after long intervals is honestly the smart way to go. But it’s clear that the developers didn’t mean for their latest project to be something that people need to go cold turkey on from time to time. The anime take on the visuals are okay, but they don’t look as impressive as they should be since they’re powered by the PS4.

Fate/EXTELLA: The Umbral Star introduces the visual novel’s brand of fighting Servants to new fans in a good Musou action/adventure. The varied roster and wide array of fighting styles makes heading into battle an enjoyable affair. The main story and side missions do enough to help newcomers understand why such a royal war is taking place. But that old feeling of repetition seeps into this Dynasty Warriors-like brawler. The process of hacking, slashing and owning territories is fun at first, but it turns into a “been there, done that” process if you stick to it for too long. Fate/EXTELLA: The Umbral Star can be enjoyable in quick bouts of play and is still a decent beat ’em up for the PS4/PS Vita. 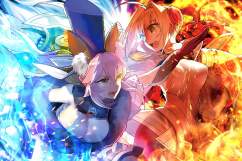 ‘Fate/EXTELLA: The Umbral Star’: 5 Fast Facts You Need to Know