For those of you who played through the 1st Injustice’s Story Mode, you all know how Superman became the tyrannical leader of Earth.

Not only did he have to deal with the constant threat of an uprising led by Batman, he also fought to keep humans under control as a part of The Regime. He was eventually beaten and taken into custody for his crimes, but this new Injustice 2 story trailer shows us he’s not quite finished yet. The new footage seen in the video posted above gives us a few scenes from the game’s story campaign, plus our 1st official look at the returning Cyborg in action. Cyborg seems to be at odds with a hero that has a similar skillset – Blue Beetle.

Check out the new trailer, enjoy all the superhero trash talk and watch a few new grudge matches unfold. 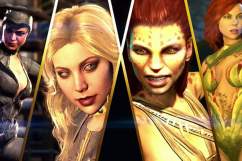