Check out our top picks for the best free Android games that launched during January 2017.

We’re genuinely shocked that its taken so long to put the Star Wars universe into the ever evolving MOBA atmosphere. Star Wars: Force Arena is proof that more legendary franchises should make the move over to quality MOBA experiences. The blaster filled, Jedi powered arena battles of this addictive PvP battler is perfect for strategy genre minded gamers. On the playable character front, familiar faces from all of the old films and newer big screen epics play a part in fighting for victory. Even the more obscure characters hardcore Star Wars fans know, like Moff Tarkin, can be called upon to help you dominate the battlefield. Creating powerful duos, hopping into huge guilds and wiping out the opposition is the name of the intergalactic game within Star Wars: Force Arena. 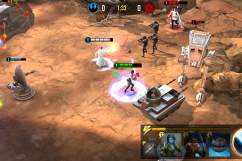 After the Pokemon craze died down years back, several other anime franchises fought for the top spot those Pocket Monsters once ruled. The card dueling IP known as Yu-Gi-Oh presented itself to young fans and turned them into master strategists. Years later, the Yu-Gi-Oh spirit hasn’t faded thanks to a host of console/mobile games. Yu-Gi-Oh! Duel Links features the most balanced and refined rendition of the long-running card battling series, so longtime players should fit right into its proceedings. Newer fans can easily learn the fundamentals and become the ultimate dueler. There’s a single player campaign mode, online PvP, familiar duelists to battle, themed card decks to construct and voices from the anime to get nostalgic about. Yu-Gi-Oh! Duel Links is at the top of its card battling game.

In War Commander: Rogue Assault’s world, the 3rd World War has concluded. But you’re still left with a bevy of willing troops and defense mechanisms to help you fend off leftover attackers. With so many war zones to take control of, it’s up to you to efficiently plan out your strategies and take down other live armies in this mobile MMO war game. This pick of ours gears itself towards the Command & Conquer and Clash of Clans crowd. It all comes down to building your base, developing and spreading out your troops, upgrading your forces and taking control of the most territories. War Commander: Rogue Assault’s solo and PvP battles are a sight to behold and a joy to take part in.

There seems to be more of a trend where channels air new cartoons about collecting creatures. Slugterra is one of those animated properties and its unique collectible creatures comes in the form of Slugs. This new game based on the new property is a match-three puzzler filled with one-on-one duels. If you’ve followed the exploits of the cartoon’s heroes, villains and slugs, you’re gonna love every piece of this game. For those of you who’ve never even watched a single episode, there’s still an awesome game here for you all to enjoy. Collecting slugs is a spirited affair, matching power tiles is always fun and clashing with big bosses just adds to Slug It Out 2’s already high fun factor.

There’s such a deluge of tower defense games all over mobile gaming storefronts. Most of ’em are pretty good since they stick to the finer points of the genre and add their own spin to it. Castle Creeps TD follows that route by adopting a much faster style of play, a cool animated art style and some memorable heroes for hire. The tried and true features that most tower defense games focus on are here – big battles, tons of forts to construct and hilariously animated characters you’ll eventually grown enamored with. Castle Creeps TD stays fun throughout its collection of chaotic, top-down TD battles. 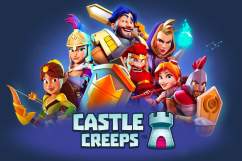 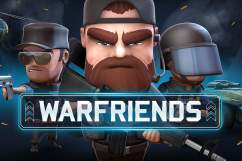