Injustice 2 is filled with a great lineup of DC’s best female heroes and super villains. Wonder Woman, Harley Quinn, Black Canary, Catwoman and a bunch of unannounced ladies will clash with their gentlemanly counterparts in the game soon. Diana Prince will have her hands full with her animalistic arch-nemesis Cheetah, who’s finally gotten her very own showcase trailer. Cheetah is all types of vicious and her moveset is all about utilizing superhuman speed and strength. Watch her deal tons of damage with her super fast combos, check out the newest Injustice 2 stage and decide if she’s going to be your main. Now if we could just get that Red Hood reveal trailer we’ve all been fantasizing about… 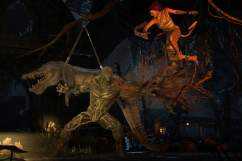