So the rumors were indeed factual!

A few weeks ago, word got around that Eddy Gordo from Tekken 3 was shown off as the newest member of Tekken 7. Now we have official proof of the Capoeira master’s existence in this summer’s most hyped fighter. Eddy’s back to dance all over his opponents’ faces and cause extreme discomfort for the person unlucky enough to face you. He still looks as cool as ever and he’s brought along with him a number of new tricky maneuvers. And of course, a lot of is older moves are still present and accounted for in Tekken 7.

Enjoy his new character reveal trailer above (peep the new music and stages, too). We wonder who could possibly be next up for Tekken 7… 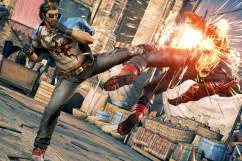