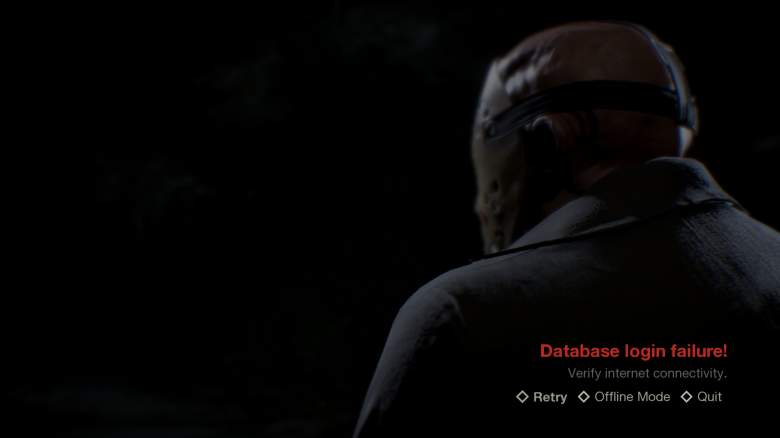 Friday The 13th: The Game has had a rather rocky start, as the past few days since its release has been full of server issues, bugs, and login problems. One of the most popular that has sprung up across all versions of the game is the “Database Login Failure.” This issue will appear when players attempt to login into Friday The 13th: The Game, which results in players unable to advance to the menu system. They are given a chance to play Offline, however, this is not ideal given that this game is a multiplayer title.

If you get a Database Login Failure don’t panic because it has nothing to do with your system despite the game telling you to verify your internet connectivity.  This is a server issue and is a known error that developer Gun Media has already acknowledged and are working to address. However, this problem has appeared multiple times since the game’s release, so it’s possible that this might occur again.

We don't have a 'progress bar,' but most everything is spun up and we'll be turning on here soon. Appreciate the patience, almost done!

The team addressed the issue in a lengthy Facebook post where they explained that they are working around the clock to resolve this issue. Here is their statement as to why the Database Login Failure is appearing so frequently:

Our database was hit really hard when the game went live. We had upwards of 75K players in a short period of time. Due to this our database was hit hard. We tried spinning up more nodes to help alleviate the stress but ultimately caused some corrupted nodes which is causing people not to be able to login that were affected by those nodes. In addition it has caused major slow downs in our database software which can on and off effect other accounts from logging in.

Another odd issue is that players, including myself, encountered as that they were able to login into Friday The 13th: The Game, but their progress appeared to be completely reset. Thankfully, this is not the case and it’s just an error with the game itself. If you log on and it shows you at Level 0 with no perks on any of your counselors, then the bug occurred. You will simply need to wait this out, however, you can still play as all of the previous perks you had equipped will still be active. For whatever reason, this issue doesn’t allow us to see the progress or perks we have despite them still being equipped.

Also, try holding off on buying perks for right now as Friday The 13th: The Game has a habit of freezing up and crashing before anything is selected. Unless you could login with no issues and your progress isn’t showing as reset, then don’t buy any perks. We’ve experienced multiple crashes when trying to buy perks across all different states of activity with Friday The 13th: The Game, so be cautious.

Finally, if you are having trouble with connecting to Quickplay as a group you might want to consider inviting a few friends for a private match instead. You can still gain XP and it will be a far smoother run for those having host connection issues. We will continuously update this post as we know about the error, how to fix it, or if the problem has been fully resolved.

Gun Media have sent their changes live across all platforms and are urging players to report any issues they may experience. Players shouldn’t encounter this error any time soon, so hopefully we can now all get back to slaughtering those rowdy teens.

WE ARE LIVE! – Let us know if you are still seeing issues!