A review copy of the game was provided for us.

Let’s get the comparisons right out of the way, Oceanhorn: Monster of the Deep takes a lot of influence from the Legend of Zelda series, and that’s not a bad thing. The game features puzzles, dungeons and many of the same items you’ll find in the Zelda series. Many games have tried to emulate this formula and few have come close to capturing the magic. I’m excited to say that Oceanhorn comes as close to capturing the essence of the Zelda series as any game I can think of in recent memory, but that doesn’t mean it is without flaws.

Oceanhorn originated as an iOS game and you can still feel its mobile roots in the Nintendo Switch release. The player collects blue crystals, complete challenges, collects coins and levels up by completing these challenges in what feels like, at its core, a very mobile game-oriented experience. The combat in the game is often quick and easy, which isn’t bad for a casual experience, but may leave those looking for a challenge to be a bit disappointed.

With that out of the way, Oceanhorn feels almost exactly like a typical Zelda adventure. Even your character model looks to be inspired by the series. The game starts out with a quick and basic tutorial, and then lets you go out and be the hero you are destined to be.

Before I continue on, I think it’s important to mention that the performance with this game is excellent. The Nintendo Switch has caught some flak recently for producing less than ideal ports of games coupled with poor resolutions and choppy framerates. I can assure you that is not the case with Oceanhorn. You’re getting an excellent port of the game so you shouldn’t have to worry about performance when comparing to other platforms.

The game takes place on a series of islands, which you must travel to find your father and take down the title Oceanhorn. The game is presented with a top-down camera angle, reminiscent of Zelda games of old and more recently, A Link Between Worlds for the Nintendo 3DS.

Throughout your journey, you’ll collect new items, such as bombs, which will be used to help your progress through the various dungeons and trials you find on the islands. The puzzles you find on the island are not too difficult to figure out and you should be able to breeze past them without becoming too stumped.

Looking at the game and its sailing mechanic, you can see clear nods to The Wind Waker. Unfortunately, it isn’t as it seems as you can’t control the sailing, but it is instead a linear path from island to island.

Where the game shines though is with the captivating soundtrack. While you plod along through the game, the soundtrack will never fail to disappoint you, leaving this game worth it just for the soundtrack alone.

The game does a fair job of scratching that Zelda itch. For a $15 title, the roughly 10-hour story felt like a decent length for a budget title. Don’t go into this game expecting quality like the Zelda series, but instead with a short adventure that feels a lot like a Zelda game.

The game will surely benefit from the lack of notable titles on the Nintendo Switch. The console is just under four months old and hasn’t had many noteworthy titles released for it, which will lead owners to browse the eShop and see titles like Oceanhorn. I’ll put it like this, there’s surely a lot worse you can do with $15. 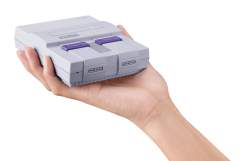 Read More
Game Review, Nintendo Switch
Does this Zelda clone live up to its billing?