A new update for Middle-earth: Shadow of Mordor has been revealed and it’s looking to add some intriguing continuity between it and the upcoming sequel Shadow of War. Dubbed the Nemesis Forge, this update will allow players to transfer both their top nemesis and the most loyal orc from the original game to Shadow of War. This means if you have had a longstanding rivalry with an orc in Shadow of Mordor it’s very possible they will appear in Shadow of War just to cause you more trouble.

Inversely, if there has been an orc that remained extremely loyal to you after the player corrupts them, then they will appear in Shadow of War as an ally. Given the biggest selling point of this series has always been the Nemesis System, this update is a welcome addition. It’s clear that developer Monolith really wants to make every encounter feel far more personable so bringing over someone you have a long standing rivalry with is certainly one of the best ways to achieve this.

For newcomers, Middle-earth: Shadow of Mordor is on sale now for 80% off its normal price for Xbox One, PS4, and PC. This sale will go from now until:

If you are a new player to the game, simply select the Nemesis Forge game mode at the main menu to begin this journey. However, if you have already finished Shadow of Mordor, this new update will automatically select your top nemesis and bring them over to Shadow of War. This is a nice inclusion for those who have moved on from the game and will certainly reignite some old rivalries with your enemies.

The Shadow of Mordor Nemesis Forge update is out now so get out there and start making those orcs mad. Middle-earth: Shadow of War is set to release on October 10 for Xbox One, PS4, and PC. 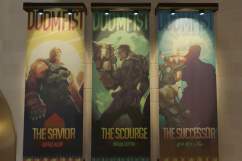 Overwatch’s Doomfist: Everything We Know so Far