The Brave Heroes have been added to Fire Emblem Heroes, taking fan favorite heroes and giving them powerful new weapons and abilities. This summoning banner is unique in that you can select which of the four 5-star heroes you want to summon for free. But which one should you pull? Read this in-depth guide to find out.

Thanks to GamePress for providing me with all the resources for my research.

Stat-wise, Brave Lucina is very similar to her normal counterpart except that she has slightly less HP and slightly more defense as well as being a blue unit instead of a red one. This means that just like her regular counterpart, Brave Lucina has a great offensive presence thanks to her high speed and attack, and she’s also the fastest lance infantry unit in the game. But what makes Brave Lucina truly stand out is her exclusive weapon of Geirskogul, which grants her +3 defense and all allies with swords, lances, axes, bows, or daggers within two spaces of Brave Lucina +3 to attack and speed during combat. It’s hands down one of the best support weapons in the game as it essentially gives players a buff almost as good as Goad Cavalry, and without the class limitations. This means that Brave Lucina can not only dish out damage but help her teammates do the same.

Despite all these perks, Brave Lucina is still vulnerable to magic and lacks the Renewal effect of her normal counterpart’s Falchion, meaning that she has to be more careful in battle. The ability of Geirskogul also only applies to physical attackers, meaning that she’s no use to mages.

Try to get a Brave Lucina with a positive speed IV. She can take a negative IV in HP or resistance.

Keep Drive Speed so you can give your allies even more speed (even those unaffected by Geirskogul). Have her inherit Renewal if you want to keep her healthy or Desperation if you want to help her offensive presence even more. Sturdy Blow can be kept as it works well with her stats, but can be swapped out with Fury to boost all her stats at the cost of taking damage or even Life and Death to boost her speed and attack while sacrificing her defenses. Reciprocal Aid works well for her role as a support but you can boost the stats of allies even further by giving her a Rally skill. Aether is great for ignoring enemy defenses as well as keeping Lucina healthy, but you can have just Luna as it has the same armor piercing abilities as Aether and has a much quicker cooldown (just without the HP restoring abilities). You’ll also save some SP you can invest in other skills. Give her the HP +3 sacred scroll to help her out defensively and Speed +1 to help her out offensively.

Brave Lucina works wonderfully with characters with brave weapons as she can boost their speed and make them attack four times a turn. Also bring a unit capable of defeating green tanks or magic users as they can tear down Brave Lucina.

Just like his father, Elwood, our brave boy Roy rides a horse and uses a stronger version of his father’s blade. Blazing Durandal not only raises Brave Roy’s already respectable attack stat, but grants Special cooldown charge +1 if his attack is higher than the opponent’s. This means that he can activate his special skill of Galeforce sooner, which allows him to make another action after initiating an attack. This combined with buffs from Hone or Goad Cavalry makes him one of the strongest physical cavalry units in the game.

However, keep in mind that he’s vulnerable not only to blue mage units but also characters with weapons that do extra damage to cavalry units. He’s also unable to move through forests on the map, limiting his mobility in heavily forested maps. Also, Brave Roy is best if you have sufficient buffs from cavalry units backing him up.

Brave Roy works best with a positive attack or speed IV. He also can take a negative IV in resistance.

Desperation works so well with his offensive presence that it should be kept. It allows him to make follow-up attacks immediately after attacking if at or below 75 percent HP, meaning that he’ll be able to attack and potentially kill units before they even get an attack in themselves. Steady Blow can be kept as it boosts his speed as well as his decent defense, but can be swapped out with Life and Death to boost his attack and speed while sacrificing defenses so Brave Roy has an easier time making follow-up attacks. Have him inherit Fortify Cavalry to protect the other cavalry units or Hone/Goad Cavalry to boost another heavy hitter like Reinhardt. Also give him Reposition to help make teammates more mobile. Give him the Quickened Pulse sacred seal if you have it to help him activate Galeforce sooner or Attack +1.

Pair Roy with dancers to make him take an extra turn even more often. No matter what, you’ll need to pair him with a cavalry unit with Hone/Goad Cavalry. Also pair him with teammates that are strong against blue mages.

Brave Lyn not only has a horse and a bow but has more attack than her normal counterpart. This makes her have the 3rd highest attack among archers and tie for number one with a cavalry buff. That combined with her high speed (2nd highest among archers) makes her able to knock out many units. Her base kit is already strong, meaning she’s fantastic even without much investment. Her bow Mulagir not only grants three extra speed but nullifies the buffs from magic users, completely shutting down “blade” tome users popular in the metagame. She also gets Sacae’s Blessing which prevents foes with swords, lances, or axes from landing a counterattack if they have Distant Counter, another popular skill in the metagame. And don’t forget Attack Smoke which inflicts negative seven attack on foes within two spaces of target through next actions after combat. Swift Sparrow boosts attack and speed during battle and her special skill of Draconic Aura grants 30 percent to attack.

However, she has the 2nd lowest HP and 3rd lowest defense among archers, making her vulnerable to brave weapons. However, she does get protection thanks to her high speed and Sacae’s Blessing. The buff cancelling effect of Mulagir also doesn’t apply to dragon units even though they are magic users. Sacae’s Blessing also doesn’t apply to dragons with Distant Counter. She also has many of the same weaknesses as other cavalry units.

A positive IV in attack or speed is perfect for Lyn (though speed is preferred if running a Brave Bow set). She can live with a negative defense IV.

You can give her Reposition and she’s honestly good to go. However, you can also give her a Brave Bow+ if you want to annihilate units with four attacks in a row. You can also have her inherit Life and Death to boost her attack and speed even more, Cancel Affinity to prevent her from getting beat by “raven” tome users, and Threaten Defense to lower the defense of opponents and make them even more vulnerable. Also consider giving her Desperation and Luna as well as the Attack +1 or Speed +1 sacred seal.

She works best with cavalry units boosting her stats. She can also hang out with units buffing several stats at the same time such as Brave Lucina. Just be sure to have a mage unit that can take down tanky units like Zephiel and Effie.

We like Brave Ike because of his massive attack and defenses. His father’s axe Urvan not only accelerates the special trigger (cooldown count -1) making him activate the powerful Aether sooner, but also grants him 80 percent reduced damage from foes’ second consecutive attack onwards giving him protection from brave weapon users. Beorc’s Blessing nullifies the buffs of flying and cavalry units during combat, which is fantastic as buffed cavalry units are some of the most powerful and common units in the metagame.

However, his relatively low speed makes him susceptible to follow-up attacks, making him especially vulnerable to speedy mages who are not affected by Beorc’s Blessing.

Grab an Ike with a positive defense or attack IV and a negative resistance IV.

You can keep Aether if you also keep Steady Breath which boosts defense and also grants Special cooldown charge +1. However, his high defense makes him perfect for Bonfire as a special skill. He’s also brilliant with Distant Counter to protect against bow users and even magic users. Beorc’s Blessing is great but you can also give him vantage which allows him to counterattack first if below 75 percent HP. He comes standard with Threaten Defense which allows him and his teammates to defeat foes easier, but you can also run Hone Speed to buff his high speed and attack partners. Then give him Reposition or Reciprocal Aid as well as the Quickened Pulse or Attack +1 sacred seals.

Pair Ike with a blue unit like Brave Lucina or Delthea to buff him while also countering the many red units that give Ike trouble. Ike can work with just about any unit that can give him buffs.

If you’ve been saving your orbs, now is the time to spend them. These four heroes are some of the strongest in the entire game, and their base kit of skills means you don’t have to invest in them as much as other heroes. But if you do invest in them, you can make them even scarier.

If you managed to snag any of the Nohrian Summer heroes, click the link below for a guide on how to use them to their fullest. 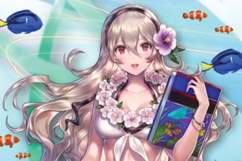