Electronic Arts had big news to share today regarding the release of the upcoming Need for Speed Payback.

Today, the BMW group and EA have announced that the 2018 BMW M5 will be available in Need For Speed Payback. Today’s announcement marked the first time BMW has revealed a car through a video game partnership. The car will actually be available in-game before it’s available anywhere else. This means you’ll be able to get behind the wheel of the new BMW in-game before you get to do it in real life.

Marcus Nilsson, Executive Producer at Ghost Games, the developer of Need For Speed Payback, had a lot of good things about the BMW M5 and the partnership.

“The new BMW M5 is a stunning car,” said Nilsson. “With immense power combined with gorgeous design, our players are going to love getting behind the wheel of the new M5. Whether it’s pulling off intense heist missions, or outrunning cops in epic pursuits or just cruising the open world, this car embodies performance, speed and desire, making it one of the pinnacle rides in Need for Speed Payback.”

The BMW M5 in-game stats will also match its real life specs. You will be able to see all of the features on display in Need for Speed before you see them in real life which include 441 kW/600 hp, peak torque of 750 Nm (553 lb-ft) and 10.5 l/100 km [26.9 mpg imp] fuel consumption combined/ 241 g/km CO2 emissions combined, which promise supreme propulsive power and formidable performance.

“The M is not only synonymous for the world’s most powerful letter, but has also become a synonym worldwide for the prototype of the Ultimate Driving Machine. Take a look at the new BMW M5: its power output, torque and acceleration, the M specific all-wheel drive system M xDrive and its stunning design make our all-new toy the perfect feature for Need for Speed,” said Frank van Meel, President BMW M Division. “While the M5 won’t be officially released until next spring, Need for Speed players can drive it first and exclusively in Need for Speed Payback. We at BMW M are really proud of this collaboration.”

Need for Speed Payback returns after of a brief hiatus of the series. Payback will introduce three new characters and revenge-based storyline. The game promises deeper performance and customization that any game before it in the series along with the return of cop chases. The explosive set pieces are also returning with Payback. 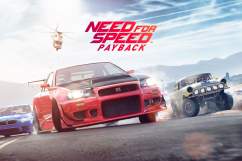