Overwatch’s Summer Games 2017 has officially been announced and players are already gearing up for the return of this popular event. While there have been numerous teases and leaks, developer Blizzard has finally revealed that both the event and special brawl, Lucioball, will be returning. Thankfully, we will not have to wait long for this content as the Summer Games 2017 will begin on August 8 and run until August 29. There was no exact time given for this event’s release, but if we look at past events expect it sometime around 1-3 p.m. EST.

Lucioball has received a number of different changes both to how it’s presented to the player and some mechanical alterations. Players can now no longer “boop” your opponents so you will need to wait for the perfect time to shoot if you want to score. Additionally, Lucio’s ultimate has been altered to give him a speed boost as opposed to pulling the ball near you. This was a popular tactic during the 2016 Summer Games as users would hide in the enemy goal, activate their ultimate, and drag the ball into the goal for a point. It was considered rather cheesy by a lot of players so this ability has been removed entirely.

We also know that Lucioball will feature two arenas this time, with the Rio de Janeiro, Brazil stadium making a return alongside the new Sydney, Australia stadium. Players can now also compete in a competitive Lucioball mode, with players earning a special spray if they finish their placement matches. However, if you reach Top 500 then you’ll be given an additional, unique spray to show off to all your friends.

Junkrat and Mercy have also been confirmed to obtain legendary skins and users can purchase old outfits for an extremely discounted rate. Game Director Jeff Kaplan also teased that McCree and Widowmaker fans will be very happy, but he didn’t elaborate.

The Overwatch Summer Games 2017 will begin on August 8 and end August 29. 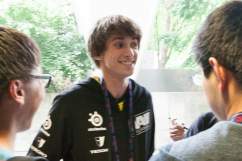