There was no real information given to what exactly would be coming, but judging by the photo posted we can deduce a few things. Clearly, new Santa inspired clothing will become available, along with a variety of different holiday-themed items and food. What will be interesting is how users unlock these items in-game. It’s fully possible that this new event introduces the clothing crafting system, which has been absent since the beginning of the game. If not, players will probably have to earn any winter-themed outfits either from an animal friend or by purchasing them in the marketplace.

It’s also entirely possible that new friends will be added to the game for this event. There has been no word on when this event will end or exactly what is being added. If any new animals or Stretch Goals are added, it should be considered as a timed inclusion. Because of this, make sure to really work on completing anything new that’s included so you can obtain all that sweet loot. Some new items we see int he photo includes a snowman, Christmas tree, rug, candles, Christmas lights, and a delicious looking cake.

Since this event begins tomorrow, players should try to save and gather as many resources as possible. This is just a precaution to ensure that users can quickly level up friends during the holiday event. The last thing you want is to be completely emptyhanded and have to waste time foraging. Make sure to use the nets, honeypots, and Market Box to collect any resources that you are missing. The same goes for your Bells and Leaf Tickets, which should also be saved since there is little doubt that the Market Place will have some new items to buy.

One interesting thing to watch out for is when Christmas actually rolls around. This series is notorious for having their character’s dialogue change or events happen during specific holidays. In Animal Crossing: New Leaf the game celebrated “Toy Day,” which included a character dressed as Santa. The fun began if the player had a corresponding Santa outfit, as they would be gifted with a bag of presents to give all the townsfolk. It would be surprising if Pocket Camp did something this in-depth, however, players should absolutely login at least once on Christmas just in case anything else was added in.

Currently, Nintendo has not revealed when or what time this holiday event will end. For more Animal Crossing Pocket Camp news, guides, and features make sure to check out Heavy’s gaming section. 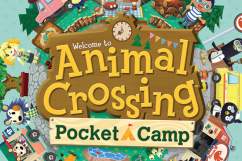