Who knew that a sport that began in a university laboratory would end up taking place in a stadium with millions of viewers.

The first known video game tournament according to Kotaku is the Intergalactic Spacewar Olympics on October 19, 1972 with students at Stanford University playing Spacewar!. Fast forward 40 years later and eSports as we know it have risen to prominence with millions of viewers glued to streaming services like Twitch and thousands of dollars at stake as players compete in matches of Starcraft II, Street Fighter, and more. It’s getting bigger every year, and many companies have taken it upon themselves to ride the wave and make it bigger.

ELEAGUE is one of those companies. ELEAGUE is an eSports tournament and content brand formed in 2016 in partnership between Turner and IMG. ELEAGUE General Manager and Turner Sports Vice President of eSports Christina Alejandre told Heavy via telephone that Turner Sports really wanted to get into the eSports space and TBS was going through a rebranding process at the time and wanted to see how they can reach a wider demographic. As eSports rose, they did extensive research to figure out who the right partners would be and ELEAGUE was born. ELEAGUE has featured games from Counter-Strike: Global Offensive to Overwatch. The ELEAGUE Major Grand Final set a new record on Twitch with more than one million concurrent streams and a total reach of over 3.6 million viewers through the course of the event. It also received a Sports Emmy nomination for Outstanding Studio Design and Art Direction in March 2017.

Their latest tournament is the ELEAGUE Injustice 2 World Championshop Playoffs. The final four competitors, Christian “ForeverKing” Quiles, Ryan “Dragon” Walker, Denom “f0xyGrampa” Jones and Sayed “Tekken Master” Hashem Ahmed, will compete for the title of World Champion and the largest share of the event’s $250,000 prize pool as they play Injustice 2. The competition is taking place November 10 at 10 p.m. ET across TBS, Twitch, ELEAGUE.com, and YouTube.

When Heavy asked Injustice 2 Director and Mortal Kombat Co-Creator Ed Boon via telephone if he ever imagined all the way back to the days of the original Mortal Kombat that his games could be featured in the massive eSports tournaments of today, he said that he literally couldn’t imagine it because that whole infrastructure of streaming didn’t exist back then. Aside from large scale tournaments like the Nintendo World Championships of 1990, most tournaments at the time took place in arcades.

In designing Injustice 2 with eSports in mind, Boon was aware of players who spend eight hours a day playing the game and how they could find brand new nuances and strategies to the game that they need to address. It’s hard to predict everything that people are going to come up with, so they designed the game so that they can literally tweak things on the fly to keep it as balanced as possible according to the latest findings. But while eSports is in the minds of him and his team at NetherRealm Studios when designing Injustice 2, it’s not the main focus.

“One of the things that our studio prides itself on is making a game that’s as accessible to as many people as possible,” Boon said.

Getting casual players involved in eSports can be quite a challenge. It’s usually not as simple as kicking a ball into a goal. Many games have tons of mechanics that happen both on the screen and in the background. With fighting games, you have strong, medium, and light punches and kicks, command grabs, supers, cancels, and a bunch of other techniques. All of this can be alienating to many viewers.

One way to get casual players involved is to include game features and difficulty levels that are friendly to them but then put in mechanics that eSports players will find and strategize with, as Boon has done with Injustice 2.

Alejandre said that a big reason that Injustice 2 is especially great for casual players to watch is because the fighters are some of the most iconic characters in all of media. From Batman, Superman, Wonder Woman, the Flash, Green Lantern, to the Joker, the gang is all here. Even your grandparents know who they are. Having some familiarity into the characters and their superpowers gives you a better idea of their abilities in the game, allowing you to understand the game better.

Boon said that a lot of time and effort when into making the fighters of Injustice 2 as authentic as possible, from their abilities and lore to their conversations before each match. Their work is thanks in part to their partnership with DC Comics as they know the source material better than anybody. Though they stuck to the source material as authentically as they could, DC Comics and Warner Bros. didn’t stop them from creating their own version of the DC universe. “The fact that we made Superman a tyrant demonstrates their open mindedness to telling a story that is outside of the norm of what you would see with a character like Superman,” he said.

Ed Boon explains that spectacle is also very important to having a game be viable for eSports entertainment. There are many great competitive games but they aren’t as fun to watch as others.

But this goes beyond flashy graphics and animations such as the over the top abilities of Injustice 2’s fighters. One of the most important parts of getting people involved in watching eSports is being able to clearly understand it. Even with all of the mechanics games have, there’s usually one very clear goal. In fighting games, it’s simply to reduce the health of the opponent to zero through combat in order to win the round. Alejandre gave the example of Counter-Strike with its premise of taking out the enemy team to wind the round. She said that there’s a little less of a barrier to entry on understanding the game allowing you to focus on the competition aspect. With that simple premise comes the ability to raise the stakes and have the mechanics create nuance and tension in the match. Alejandre also works with talent to explain those intricacies and nuances in greater detail than normal for the audience.

All of this combines with the human drama that goes on in between the games played. Boon told Heavy that traditional sports have stars, personalities, rivalries, and more that makes sports all the more interesting. “Some people don’t realize that with watching football and stuff like that there’s a history of players and the relationships with the league, the team, their teammates and all that plays into the entertainment and drama of those sports, and those elements absolutely exist in eSports as well,” Boon said.

Alejandre recognizes the power of creating compelling storylines and getting viewers invested in what’s going on in the game. She cites the performance of the players for the Injustice 2 World Championships over the last few weeks. Quiles beat Dominique “SonicFox” Mclean, one of the best best players of Injustice 2, twice in order to qualify for the playoffs while driving Mclean out of the playoffs. Boon expressed similar awe at this situation, comparing it to if the Chicago Bulls didn’t make their playoffs. Alejandre also likes the individual personalities of the players such as Walker. She said that Walker was dominating over the last year yet is one of the most gracious players she’s ever seen. This human element is so integral to the experience of eSports that in August 2017, ELEAGUE launched of ELEAGUE: Road To The International Dota 2 Championships to help tell the story of the players.

She told Heavy that she couldn’t have asked for a better group of players for the playoffs.

“I think a lot of people assume that it’s a bunch of kids playing video games,” she said. “[They] don’t understand eSports and don’t understand the effort that goes into actually being a pro player and the careers these players are making.”

You can watch the ELEAGUE Injustice 2 World Championship tonight on TBS, Twitch, ELEAGUE.com, and YouTube.

Be sure to check out Heavy for more eSports and gaming content. 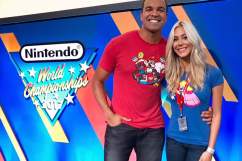