The upcoming release of PlayerUnknown’s Battlegrounds will be targeting 30 frames-per-second across all three Xbox One consoles.

Brendan Greene, Player Unknown himself, told gamesTM (via WccfTech) that PUBG on Xbox One X will run at 60 FPS while the base Xbox One was running between 30 and 40 FPS.

Definitely on Xbox One X, 60FPS. On Xbox One, we’re not sure. We may have to limit it at 30FPS, maybe, but the last time I saw it, it was running at about 30 to 40. We’re still constantly improving it so, you know, the aim is to get to 60. That’s why we’re doing Game Preview, because I think the great thing about console is it’s a locked hardware system, so we can do really specific tweaks that tune it for those systems.

I have great faith that we’ll get there. The great thing about Battlegrounds is that it’s not…unlike the more high paced shooters, frame rate isn’t that important. Yes, it is important, but it’s not as important for us as it is in a twitch shooter. So we’re aiming for 60; not sure if we’ll get there, but that is our aim.

Despite saying this in an interview, Greene later took back this statement on Twitter by saying the game would target 30 FPS across all iterations of Xbox One.

While I previously stated PUBG would run at higher FPS at XGP launch on 12/12, I want to clarify that PUBG will run at 30 FPS across all @Xbox One devices. We’re constantly refining the game & exploring options to increase FPS, but this early in dev, we’re unable to confirm more.

It’s no secret that PlayerUnknown’s Battlegrounds still needs a lot of polish in terms of the PC version so it shouldn’t come as much of a surprise that the same will be required on Xbox One. One of the biggest complaints you’ll see in the Steam reviews is the games lack of optimization in some areas, even with high-end PC builds. It appears that pushing a higher framerate on Xbox One will be a tougher task than it is on PC.

Hoping for 4K textures on Xbox One X appears to be out of the question for right now too according to the same interview in gamesTM.

We want to get those 4K textures in there, but we still have to make them. They don’t exist yet, you know our terrain artist he’s like ‘4K textures? Fuck’ cause it’s a lot of work. The amount of detail that has to go into 4K textures is immense, and it’s going to take us some time to get them, but we do have a plan.

PlayerUnknown’s Battlegrounds does support HDR (High Dynamic Range) on Xbox One S and Xbox One X which will help boost the image quality despite not having a higher resolution.

PlayerUnknown’s Battlegrounds releases December 12 on Xbox One as part of the Games Preview Program. The developers are also targeted a full release on PC some time this month. PUBG was originally released on Steam in March and has since become a smashing success with it shattering many Steam records for concurrent players as well as becoming a hit on Twitch.

The Xbox One version will be the first time PUBG will be available on consoles but that doesn’t mean it is the first game of its type to appear on consoles. Fortnite: Battle Royale released on Xbox One and PS4 earlier this year and to top it all off, it is free-to-play. How that will affect PUBG in the future remains to be seen but the early success of Fortnite proves there is a market for battle royale games on consoles.

When PUBG was first announced as an Xbox One title at E3 2017 it was called a Console Launch Exclusive which suggests it could eventually make its way to other platforms. The easy assumption would be a PS4 version but we don’t know anything for absolute certainty yet.

For more PlayerUnknown’s Battlegrounds news and features stay with us here at Heavy. 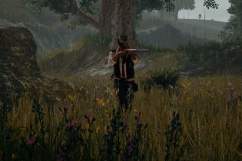