Microsoft doesn’t have a killer app to be pushing with the release of the Xbox One X but it does have plenty of third-party titles to help make up the lost ground.

Today, The Witcher 3: Wild Hunt becomes the latest title to receive an Xbox One X upgrade and it’s actually a pretty large one. This patch will be similar to the update the PS4 Pro received a few weeks back and it will give players two visual options to choose from depending on how they would like to experience the game.

The first option is 4K mode which will bump the game’s resolution up to 4K and allow the game to remain stable at 30 frames-per-second. This will make The Witcher 3 the most eye-popping it can be on console while still maintaining a playable framerate.

The second option is called Performance Mode which will enable dynamic resolution scaling from 1080p up to 4K while targeting 60 FPS. This will help give players a smoother experience but will likely not quite meet the visually fidelity offered in the 4K mode. This will also result in framerate dips and spikes which could end up giving players a bumpy experience since the framerate won’t be remaining stable in this mode.

The two options represent a huge change from how The Witcher 3 originally launched on Xbox One. It’s no secret the base Xbox One didn’t have the raw horsepower the base PS4 had so there were cutbacks with many games on the Xbox One. The most common cutback included lowered the resolution to 900p on the Xbox One and that was the case with The Witcher 3. Two years later and we’re seeing the game in 4K on Microsoft’s platform.

Both of these modes will support HDR (high dynamic range) if your TV supports it. A patch that will offer PS4 Pro owners HDR is also coming soon.

Here is the full list of changes coming with this Xbox One X patch:

Despite being over two years old, The Witcher 3 remains as popular as ever thanks to its excellent storytelling and wealth of content. The game itself still remains one of the best looking games of this generation and is often used in benchmarks to test out new PC hardware since the game is so demanding.

If the base game wasn’t enough for you, The Witcher 3 also has two lengthy DLC storylines to go with it in Hearts of Stone and Blood and Wine. These two add-ons end up adding a variety of new choices to make along the way and add hours upon hours of new content. If you still want more of The Witcher 3, you should certainly pick these two DLCs up.

For more gaming news, coverage, guides and features make sure you stay with us here at Heavy. 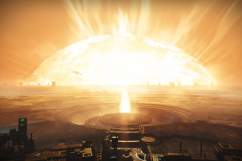