Update – January 3: Niantic has fixed the weather mechanics. It should work for all players now.

This issue should now be resolved. Thank you.

Original Story: Niantic has confirmed that the weather boosts and icon in Pokemon Go are down in what The Silph Road subreddit Admin dronpes calls a “global weather outage.”

A user on The Silph Road Reddit page who goes by nomekoPoG shared a post stating that they see neither the effects of weather nor the icon indicating weather effects are active. The page soon filled up with similar reports from areas including but not limited to Texas, Florida, Wisconsin, Australia, New Zealand, California, Singapore, Canada, Germany, Czech Republic, Mexico, France, Malaysia, Brazil, India, Israel, England, the Philippines, and many more. Reports were also shared on a similar post by User highonbamboo on the Pokemon Go subreddit.

Heavy can confirm that the boosts, visual effects, and icon indicating weather effects are not appearing in the game, at least according to one reporter from Milwaukee, Wisconsin.

User tbk007 claims that while this may be the first widespread instance of the absence of weather effects, there has been a recurrent outage for players in different areas since the release of weather effects. The user said that the outages lasted about a couple of hours at a time and go away as they come without any explanation as to why they happened, and their existence is evidenced by posts every few days on Reddit.

NianticGeorge of Niantic’s support team said that they are currently looking into the issue and thanked everyone for flagging the issue to them.

We will update the article once the issue is fixed.

Weather effects were introduced in early December 2017, as we reported. Certain kinds of weather boost the spawn rates of certain types of Pokemon. The Pokemon also grant bonus Stardust and are more likely to have higher IVs. Weather also boosts the power of certain types of moves in battle. The user interface also changes to reflect the weather with a clickable icon telling you which Pokemon types are boosted. A ring also appears around Pokemon that were boosted by the effect of weather.

Here are the types of Pokemon receiving boosted spawn rates by each weather condition provided by Eurogamer:

A few days after Christmas, the weather effects were updated giving players more options in regards to extreme weather conditions, Polygon reported. If the game believed that the weather conditions outside are potentially dangerous, then it restricted the benefits offered by weather effects. While in theory this dissuades people from putting themselves at risk in hazardous weather, this restriction can occur even in weather that isn’t nearly as extreme as the game says it is. But with the new update, players can select the options to declare themselves safe and gain the benefits of weather effects once again.

Check out Heavy for more Pokemon Go news, guides, and more. Be sure to check out our gaming coverage as well. 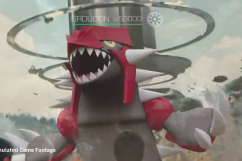