Luigi’s Balloon World is a brand new, free mode added to Super Mario Odyssey today. It takes the fun of speedrunning the game and marries it (pun intended) to the thrill of hide and seek. It’s surprisingly tricky too. Here are 10 tips and tricks for both hiding and finding balloons.

1. Start Off With a Bang

Whether you’re hiding or finding balloons, you should leave the starting area with a long jump or a roll. Starting off fast will help you keep up your momentum. Be sure to use rolls on slopes and long jumps over gaps to get to a hiding spot as quick as possible. If there’s something to capture nearby, such as the Glydon and electrical wire on top of the Sand Kingdom tower, be sure to capture them from the starting point so you have them captured right from the beginning and can use them right away.

2. Hide Your Balloon Where People Least Expect It

Find different balloons and see which common hiding places come up. Then hide your balloon in a completely different spot.

3. Hide Your Balloon Behind Walls Or Under Floors

Say you’re finding a balloon and it’s just a short drop down a wall. You drop down and it’s nowhere to be seen. Turns out it was either underneath the floor or in a hidden nook behind the wall.

These nooks can confuse players and make them lose precious seconds as they scramble to find your balloon. And if you’re the one finding balloons, you should familiarize yourself with these nooks and crannies so you don’t lose time.

A popular place to put a balloon in the Sand Kingdom is along the 2D section of the inverted pyramid. By dropping down, throwing your cap, and then bouncing off of it from a dive, you can reach the shelf and find the balloon there. Just be careful not to plummet from the pyramid as that will lead to your failure.

4. Hide Your Balloon in Places With Tricky Platforming

Hiding your balloon near a bunch of death traps is a good tactic because if players make one mistake with their platforming they have to start all over. Even places without any death pits can be good if the platforming required to reach them is tricky. These places include platforms across the poison swamps of the Lost Kingdom or the lava spouts in the Luncheon Kingdom.

5. Use Coins to Extend the Timer

For every three coins you collect, you’ll get an extra second added back to the timer. This can be invaluable when going after tricky hiding spots. Just don’t go out of your way to get a group of coins because you may end up using up more time than gaining it.

Using coins has an application in hiding balloons as well. You’re under a timer yourself, and so collecting coins essentially extends the distance you can go before hiding a balloon. And when people have to go and find your balloon, they’ll have to collect the coins along the way.

6. If You Fail to Find a Balloon, You Can Look Around

Failing to find a balloon isn’t the end of the world. Right when the timer expires, you can look around a bit to see if the balloon is right around the corner of something. Then when you try again, you can find it.

7. Here’s How to Earn Extra Coins

You can earn a sizable amount of coins for playing Balloon World. You’ll have to bet coins to find balloons but you’ll get them back and then some when you complete the challenge. But you’ll also get coins for winning multiple challenges in a row and for finding the balloon in as little time as possible. You’ll also increase your rank as you find balloons and as people search for yours, netting you tons of coins. Better yet, playing in a certain kingdom will earn you extra coins for a limited time. You can check the status menu to see which kingdom has the bonus (indicated by the coin icon).

8. You Can Place a Balloon in Every Kingdom

The game doesn’t explicitly tell you this but you can hide a balloon in every kingdom. That way more people will search for your balloons and you’ll get more coins. However, if someone finds your balloon you’ll have to replace it by hiding another.

Outside of Balloon World, you can head where the starting point would be on the map. They’re usually in places that are right on a checkpoint you can warp to. There you can run around to your hearts content, practicing your platforming and taking note of possible hiding places.

10. The Arrow Will Reappear If You Stand Still

An arrow appears above your head before you select a challenge, indicating the direction of a balloon. Along with the distance counter telling you if you’re hot or cold, the arrow is the best way to help you find the balloon. However, the arrow disappears shortly after starting a challenge. You can make it reappear by standing still. You’ll lose a good couple of seconds, but it will keep you from making a wrong turn and losing the challenge altogether. 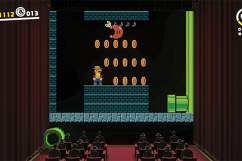 Super Mario Odyssey: 15+ Easter Eggs You May Have Missed