There are a ton of different ways to deal death in Crytek’s newest game, Hunt: Showdown. With tons of vicious A.I. adversaries and enemy players, you’ll always want to have the upper hand in fights. This can come in the form of sheer skill, but having the right tools for the job is also a benefit – especially for certain bosses or settings. However, only a handful of gear and weapons are unlocked from the start and you’ll need to spend quite a bit of time grinding to unlock everything in this game.

In order to unlock new weapons, items, and consumables you’ll need to hit that piece of gear’s corresponding Bloodline rank. This is the overall leveling system in Hunt: Showdown which will increase as you play the game. With each Bloodline rank you acquire you’ll unlock either new items or just a stack of cash. Additionally, the various hunters you recruit will already come with gear and consumable items. These weapons will not be tied to your current rank, so it’s possible that you can get a hunter with the Caldwell Conversion Chain Pistol well before you hit tank 32.

The higher your Bloodline the better tier hunters you can recruit, which will give you access to better weapons, traits, and items. Remember, if you store a weapon equipped to a hunter that’s over your current Bloodline then you’ll need to rank up before being able to use it. If you really want to rank up quickly then you’ll need to focus on leveling up your hunters. As your hunter levels up it will occasionally hit milestones which adds experience to your Bloodline.

While killing, banishing, and claiming a boss’ bounty earns the most experience, users shouldn’t ignore slaying the normal foes. Remember, as long as your hunter is alive at the end of the match – regardless if you have the bounty – you’ll be able to keep them. This means you can roam around the map slaying basic enemies for experience in areas that the boss isn’t located. It’s a good way to gain experience if you’re worried about taking a risk and losing all your gear. Also, if you are playing with a friend then all of your experience will be shared. It doesn’t matter if you or your partner kills someone, that XP will be awarded to you at the end of the game.

Ranking up your Bloodline is key to your success in Hunt: Showdown, as some of the best weapons and items are locked away. There are no XP boosts or ways to increase the rate of your experience outside of strictly grinding in matches. This could change since Hunt: Showdown is still in Early Access, but for now you’ll need to shoot a lot of players and monsters.

For more guides, news, and reviews make sure to visit Heavy’s gaming section. 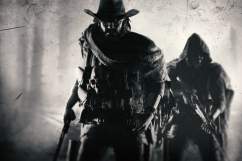 7 Hunt Showdown Tips and Tricks You Need to Know