PlayerUnknown’s Battlegrounds is a game in constant flux thanks to the addition of new vehicles, modes, maps, and weapons. For those looking to dominate this popular battle royale title, understanding the statistics of each gun or armor piece can give you an advantage. Thankfully, developer Bluehole Studios has released a new balance patch that details all of these important alterations. Originally announced on April 21 in a blog post, readers were informed that certain items such as assault rifles and level three helmets would be rebalanced.

One of the biggest issues that PUBG is facing revolves around players picking specific assault rifles over others in the same archetype. Instead of being driven by personal preference, users would pick specific weapons because they were objectively better. In addition to the various rifles, attachments also received a reworking to make them more balanced. The goal of this patch is to eliminate the idea that a single weapon or attachment is a “must have” for players.

Level three helmets also saw a notable change, as the developers viewed this specific item as a “second life.” Being able to survive a perfect sniper shot to the head certainly constitutes the idea of escaping death. While they aren’t removing the helmet entirely from PUBG, it will now only drop via care packages.

The big news is, of course, the addition of the new DMR weapon the SLR. This gun uses 7.62mm rounds and can be found on both maps. It carries 10 bullets per magazine and can be found on both of the maps. This looks like a nice hybrid between an assault rifle and a sniper, which will help with those who prefer long range combat but still struggle with accuracy.

Keep in mind these changes are only for the Test Server right now and are subject to alterations.

We explained our goals with weapon balance in last week’s dev blog. You can find the specific changes below: 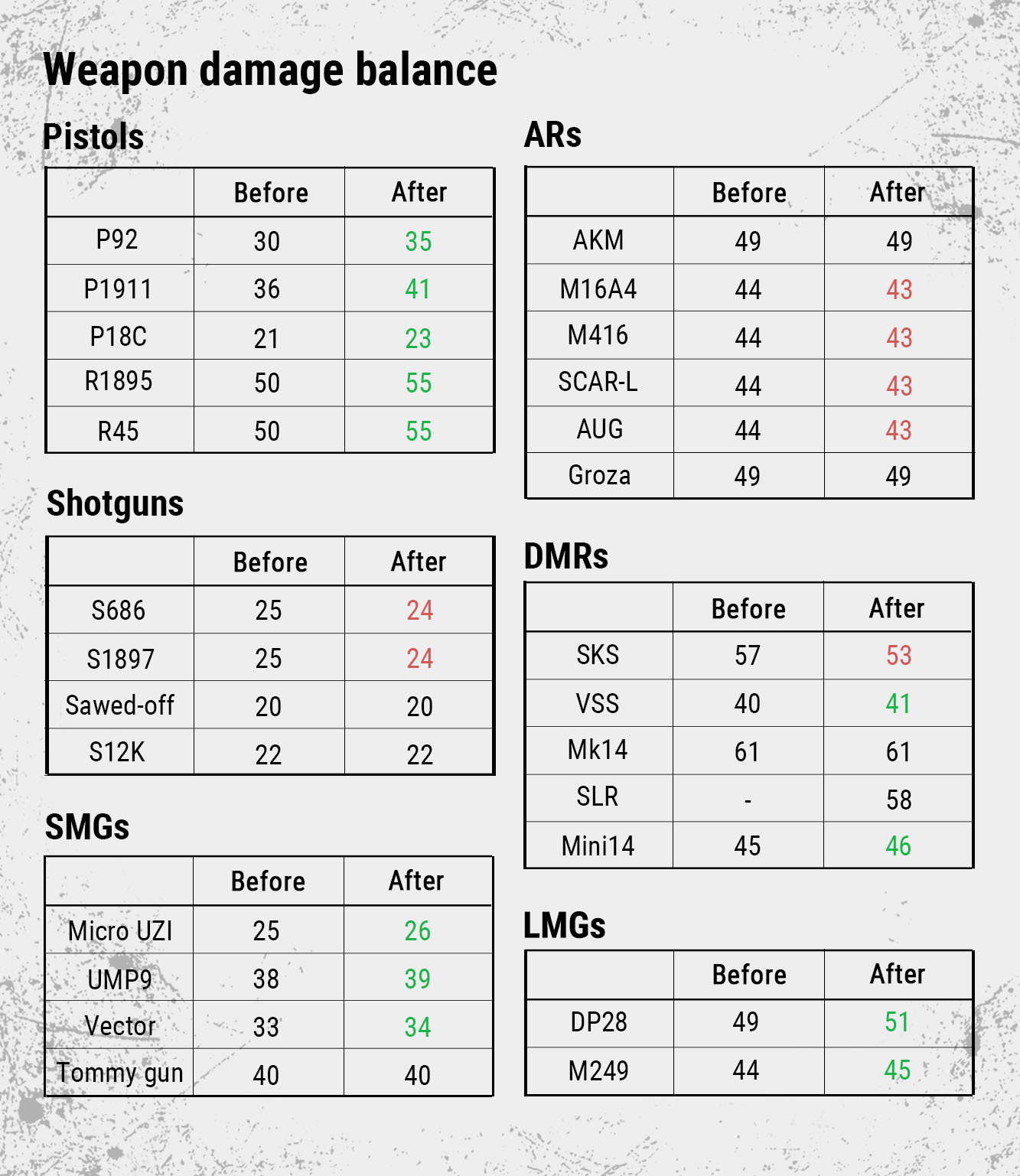 Weapon sway has been adjusted for all weapons (slightly increased side-to-side movement). And sway is now more pronounced when holding your breath.

Along with all the balance changes, we’re introducing a new weapon, a new vehicle for Miramar, and a ton of new weapon attachments.

Added the SLR, a weapon previously announced under a different name in the roadmap[www.playbattlegrounds.com]

The Mirado is a classic muscle car: a fast, four-seat sedan that’s limited to Miramar. It can be found around downtown areas and main city streets

Think of the Mirado as a compliment to the other unique vehicles on Miramar: The van is extremely sturdy, but slow and ineffective when taken off-road; The pickup is great for off-road travel; And the Mirado is the fastest way to blaze down a highway.

You can now change the reticle style and color on the red-dot, holo-sight, and 2x scope using the scope zeroing keys (Page Up/Page Down by default).

We’ve also Improved the UI for team mode and perspective selection. As before, only the host can select these options.

We’ve made more improvements to Miramar:

There’s obviously a lot to unpack here, but it’s cool that BlueHole Studios are adding in a faster car for Miramar. Given the van is usually the last result, having an additional option to traverse the desert is really nice. Speaking of Miramar, the changes to the actual map are exactly what it needed. Adding more cover to the open areas should alleviate some of the frustrations caused when the safety circle doesn’t end in a major city.

While the ARs were nerfed, we doubt it will shake up the meta too much. We might see people use the Mini-14 more or SMGs in close range, but nothing too dramatic. This wasn’t meant as a massive shift but simply tweaking the numbers. It is strange that shotguns had their damage nerfed despite being very inconsistent already on the battlefield. What will cause a more dramatic change is the new attachments that are introduced.

The 3x scope is a fantastic addition that was desperately needed, especially if its drop rate is high. 4x and 8x scopes began to feel like the rarest items in the game, so it’s nice that two more variations have been added. The reticle changes are also smart since many have their own preferences for gauging long range combat. Adrenaline Syringes being added into the world makes sense, but we question the buff to the frag grenade’s explosive damage. It already did a ton and this might have been a bit too much.

Remember, these are all currently live on the Test Server and are subject to change. It’s possible certain aspects get scaled back or adjusted before moving to the final version of PUBG.