A Dangerous Driving review code was provided by the publisher.

For years, racing game fans have lamented Electronic Arts’ burial of the Burnout franchise. Even though the open-world take on the series (Burnout Paradise) drove onto current-gen consoles in remastered form, the fact that an all-new sequel still hasn’t been announced is a sobering reminder for longtime fans. Back in 2014, former members of the team behind the Burnout games (Criterion Games) banded together to form a brand new development studio – Three Fields Entertainment. This small team of developers kept the spirit of Criterion Games’ work alive with titles that delivered plenty of mayhem, destruction, and explosions. In 2019, Three Fields Entertainment has delivered the spiritual successor to the more linear entries in the Burnout franchise with the aptly-titled Dangerous Driving.

Dangerous Driving doesn’t go big with its approach to a single-player campaign – it trims out all the open-world fat of Burnout Paradise and harkens back to the straightforward campaign of the entries that came before it. Six car classes are presented to you – you’re tasked with completing a series of events for each class before you can go onto the next one. One of the best aspects of Dangerous Driving is the nice selection of events you can run through. There’s your basic lap-based race, a Road Rage mode that wants you to take out as many rivals as possible, and Heatwave (this event should be the most familiar to those who enjoyed something similar in previous Burnout games).

Completing certain events unlocks new car class variants, which plays into the way you’ll need to take on other events. For instance, the Advanced model the Sedan class is best used during Road Rage events. That element provides a cool strategic layer where you decide which car will nab you that Gold ranking during an event that once gave you trouble. Each event is special in its own way and does a good job of giving you something new to do on a regular basis. For instance, the sense of satisfaction that comes from wiping out the opposition with a Gold ranking during a Pursuit event is huge. Making your way up to new car classes and getting acclimated to the way they feel for each event is always a fresh endeavor.

The actual driving mechanics behind Dangerous Driving are full arcade bliss. Your vehicle can drift and boost along the road while you’re hitting dangerous top speeds. Embracing your inner daredevil rewards you with the boost needed to zip past the rest of the pack and cause them to crash spectacularly. The visuals that represent this racer look fine enough, but the much too bright sunlight on some stages and last-gen graphical fidelity make it look a bit dated. Dangerous Driving’s graphics are on par with your usual arcade racer that’s smack dab in the middle of a Dave & Buster’s – it’s not much to look at, but it’s not downright hideous either. The slow-mo crashes and on-road destruction always looks great, at least.

Dangerous Driving’s racing is a fun time if you’re willing to put up with the ruthless AI. Some may find this element to be a deterrent, while others will be perfectly fine with the game’s high challenge factor. It always feels awesome to recover from a prior crash and boost your way back to the front of the pack for a photo finish. The launch state of this racer is good in parts, but several missing “gears” make the package as a whole feels unfinished.

There’s no original music to race along to – the only way you can bump to some racing tunes is through your personal Spotify subscription. There’s no way to check out your track progress via a miniature map as you make your race through it. And the biggest missing element is the lack of a local/online multiplayer mode. Yes, it will be patched at a later date. But a racing game released in 2019 should always have this traditional feature included at launch.

Three Fields Entertainment’s passion for its past work on the Burnout series can be seen and felt throughout every bit of Dangerous Driving. Arcade racing game fans will come and ultimately stay for the manic speed, outlandish crashes, and a satisfying assortment of car classes and events. What knocks this racer down a few pegs are the dated visuals and disappointing lack of basic features that every current-gen racer should include on day one. Burnout fans who want to revisit the series pre-Paradise will love everything Dangerous Driving offers. But it’s hard to look past the nagging issues and missing features that could have pushed Dangerous Driving past the competition.

Our Dangerous Driving Review Score: 6.5 out of 10 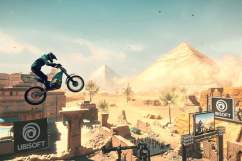 All Upcoming Racing Games of 2019