Harley-Davidson (HOG) shares continued to tumble this week after the company’s quarterly sales fell short of expectations Tuesday. That led to concerns about full-year revenue results.

The stock is down about 7% over the last five days and down about 1% in Friday trading.

From a technical perspective, Harley-Davidson stock might be at levels where a short-term buy after recent hits. From a long-term fundamental perspective, there are two things investors should watch: engines and the environment.

The good news came for Harley on the bottom line, where its first-quarter profit of $1.05 per share topped Wall Street estimates of $1.02 a share. But that’s where the good headline news pretty much ends.

Quarterly revenue was $1.33 billion. That’s down from $1.58 billion in the year-ago period and below consensus estimates of $1.35 billion. Perhaps most importantly, motorcycle shipments fell 14.7% from the same quarter a year ago.

Harley did keep its 2017 guidance of annual shipments constant, predicting it to be flat or down slightly compared with 2016.

On Wednesday, RBC Capital Markets cut its price target on HOG to $57 from $60, citing weak demand, according to Briefing.com. It lowered its expectations of 2017 shipments to -2% from no change.

Also on Wednesday, Wedbush cut its price target to $52 from $55, noting that working through the overabundance of model year (MY) 2016s was “a slow and painful process,” Briefing.com reported.

A day before, Goldman Sachs reaffirmed its Neutral rating on the stock and its price target of $54. 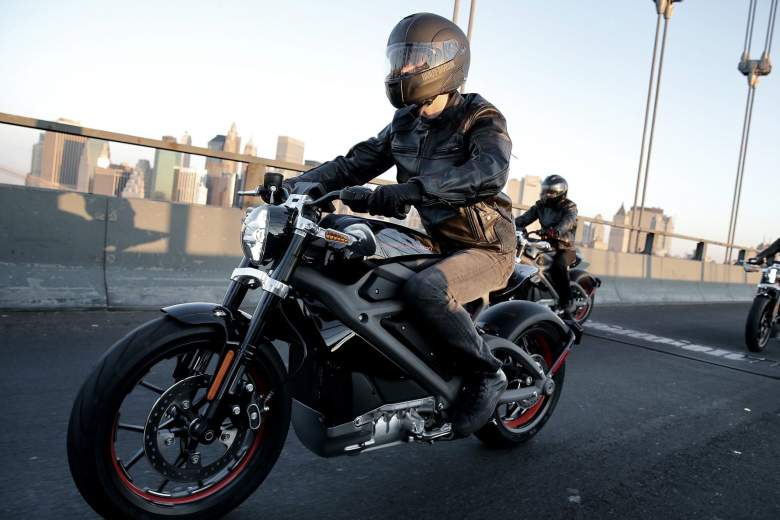 The trading range could easily last until the next earnings report, as there aren’t significant fundamental catalysts on the calendar. But longer term there are two moves the company is making that investors should pay attention to.

Are the new engines Harley-Davidson is touting as a game-changing innovation capable of bringing in converts?

The Milwaukee Eight is a significant engine redesign and rider enthusiasm for the performance will be essential for shipments. Whether the new engine will be enough to get current riders to trade in their very reliable older models is the biggest question mark.

Over the next 10 years, the company plans to launch 100 new motorcycles and pursue its electric motorcycle project.

Which brings us to this statement in the earnings release.

Grow the business without growing its environmental impact.

Green may not be the color most associated with rough and tough Harley, but it’s clearly a management priority.

“Preserving the riding environment is important to us,” the company said in its most recent Sustainability Report. “That’s why we’re developing products that address environmental issues while providing the kind of visceral, no-excuses riding experience our customers expect.”

“We know there is a strong future for our traditional products. An electric Harley-Davidson motorcycle is one of the ways we are exploring how to grow the diverse family of Harley-Davidson riders while helping preserve and renew the freedom to ride in our long term approach to sustainability.”

Translation? We have to ensure that millennials also buy Harleys.

How does the environmental message come across at a time when the political winds are distinctly laissez-faire on environmental regulation? Maybe it rubs some traditional Harley riders the wrong way, but that could be canceled out by the fact that the bikes are made in America.