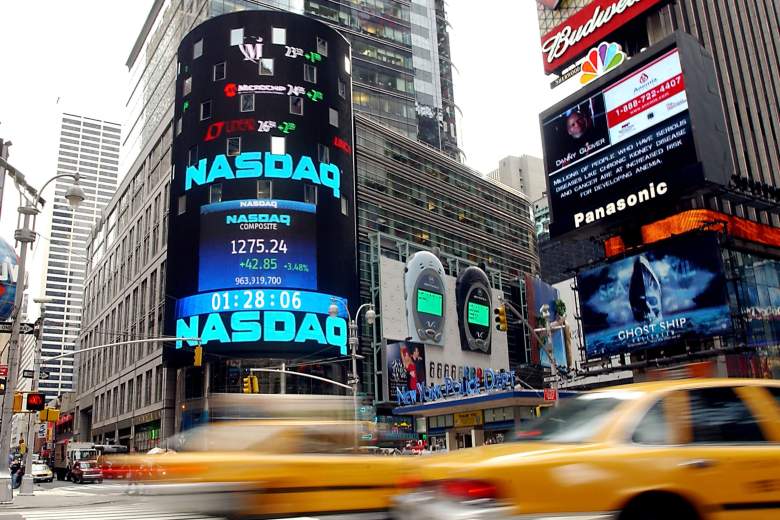 Earnings season brings another day of digesting numbers for the stock market, with a host of household names reporting results. Overall the market was little changed.

The broader market has seen gyrations this week on anticipation and then digestion of President Donald Trump’s tax plan. A proposed big drop in the corporate tax rate brought buyers out, but today is more caution given the lack of solid details.
So, investors will likely revert to the certainty of balance sheets and quarterly results and the tech sector, as always, is in focus.

Twitter’s Rally Continues; Is it for Real?

Twitter (TWTR) shares continued to rally Thursday after rising more than 10% Wednesday. The company beat analysts’ consensus expectations on the top and bottom lines for the quarter. But what investors are most excited about is a 14% rise in the number of active users compared to the year-ago period.

The stock rose nearly 4% midday Thursday. The question is whether this is the start of a solid run, or maybe just some shorts covering positions after the company finally reporting an upside surprise.

The company certainly had its share of bad news. While revenue topped expectations, it dropped 8% from the same quarter a year ago. That’s the first drop in overall revenue since Twitter went public.

“Maybe Twitter could start outsourcing the sale of some ads on its owned-and-operated properties,” Peterson wrote. “In a way, it already has, by making some on-Twitter ads available through its MoPub ad exchange.”

And then there are the trolls.

“We recognized that the very nature of the product was giving unfair advantage to people who wanted to harass. So we needed to change the product experience,” Twitter CEO Jack Dorsey told Backchannel. “We made it a priority last year, but to be very frank and honest, we only shipped one meaningful thing all year. So our progress is not something that we are proud of.”

The sell side seems a bit reticent to weigh in on the shares. Only Wedbush came out this morning with a call, simply reiterating its Neutral rating and boosting its target to $14 from $13.

Amazon (AMZN) will keep the tech number train going when it reports earnings after the bell today.

Wall Street expects the company to earn $1.10 per share for its first quarter on revenue of $35.31 billion, according to Capital IQ.

A good report looks essential for bulls as the stock is up more than 22% year to date. Still, analysts think the rally can keep going.

Wedbush boosted its price target on the stock to $1250 from $900 on Monday. It predicts earnings of $1.30 per share driven by growth in Prime memberships, which hit $80 million according to BI Intelligence. Wedbush is expecting revenue of $35.97 billion and guidance of $35.25 billion to $35.75 billion.

Yandex posted a first-quarter profit of 11.41 rubles per share and revenue of 20.65 billion rubles. Both of those numbers beat expectations and Yandex also increased its guidance for the full year. It now sees revenue rising 17% to 20% from a previous forecast of 16% to 19%.

A big boost for the company is the settlement of dispute with Google (GOOGL) on search engine requirements for Android phones. This will open up a large mobile market for Yandex’s search function.

The company said the benefits of this deal would be seen more in the second half of the year, according to Reuters.

While analyst were reluctant to jump into the Twitter pool this morning, there was no reticence in applauding Paypal’s (PYPL) numbers.

In addition to solid quarterly results and guidance and a 23% rise in payment transactions, Paypal announce a $5 billion stock buyback program. It also said that it would have its products on Android devices this year.

This morning, Piper Jaffray upgraded the stock to Neutral from Underweight, according to Briefing.com. RBC Capital boosted its price target to $52 from $50 and Needham and Stifel both issues positive reactions to the numbers.

And what would be a tech-heavy day without a little Tesla (TSLA) news. Even though the company doesn’t report earnings until May 3, there’s an interesting article from Seeking Alpha about the liabilities the company actually has from its absorption of Solar City.

This article says that because of accounting principles in Solar City’s use of Variable Interest Entities (VIEs), which are funds that let outside investors participate, there are assets that appear on Tesla’s balance sheet and liabilities that don’t.

Those liabilities total up to $4 billion that didn’t show up when Tesla argued the fair value of the deal.

It’s well worth a read, but you should not the writer is short TSLA via puts.
Shares of Tesla were up slightly midday.