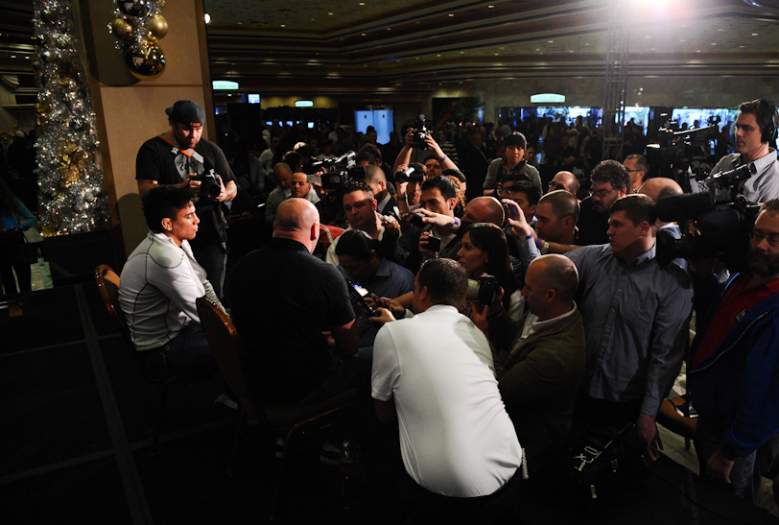 LAS VEGAS – Dana White asked for a second chair to be brought out next to him to meet with a small group of media members after Wednesday’s UFC 141 press conference. When Miguel Torres walked out and sat next to the UFC president, his typical smile had been replaced, and he was steely serious.

Torres, fired from the UFC earlier this month after a controversial Twitter post deemed insensitive by White, was welcomed back to the UFC after meeting with White, explaining what he has done since his release and offering his apology.

On Dec. 9, White fired Torres after learning of the fighter’s Tweet, which Torres said Wednesday came from a TV show. “If a rape van was called a surprise van more women wouldn’t mind going for rides in them. Everyone like surprises,” Torres posted on his Twitter feed. The word “rape” was later changed to “windowless,” but the damage was already done, and White cut Torres loose.

What the former WEC bantamweight champion did, White said, was visit each rape crisis center in the Chicago area, make financial contributions to them and get an education in the subject he attempted to find humor in.

“When I got cut, it showed me that what I say on Twitter and social media is very powerful,” Torres said. “I took a lot of heat for what I said. I took it on the chin and I realized my words are very powerful, and I’m very sorry for that. I now know what I say can hurt people. Dana and Lorenzo Fertitta took me back in, and I thank them very much for that.”

White said he took plenty of criticism when he cut Torres – especially in light of other recent comments that many deemed to be in similar distaste to Torres’ from Forrest Griffin and Rashad Evans that didn’t lead to their release. But he reiterated his decision to fire Torres was one he wouldn’t go back on, nor is bringing him back now, less than three weeks after letting him go.

“I maintained my silence,” Torres said. “I made a statement to my fans, my friends and my family, and I wanted that to be the only thing on my Facebook account and my Twitter account. Everyone who goes to my account sees that is my status and that’s what I’m doing. I wanted to be educated on the subject more, see how it affected people, see what I could do to change things and what I could do to become a better person before I talked to anybody. Thankfully Dana White met with me today – and I thank God that he took the time to talk to me and listen to my side.”

Loading more stories
wpDiscuz
0
0
Would love your thoughts, please comment.x
()
x
| Reply
Less than three weeks after a controversial Twitter post got him fired, Miguel Torres on Wednesday met with Dana White and is now back in the UFC.