Jennifer Aniston is constantly featured in Hollywood’s highest paid actresses lists. As of 2017, her net worth was $220 million. On average, she makes more than $20 million per year from acting and endorsements.

Jennifer Aniston Net Worth is $220 million

From an early age, Aniston knew her destiny was in the film industry. She was raised among entertainers (her father, John Aniston, worked on Days of Our Lives since 1985), and in high school she would organize plays and write skits with her friends. She moved to Los Angeles where she was cast in a series of roles for short-lived TV shows, and eventually rose to fame thanks to the TV series Friends, in which Aniston played Rachel Green. Today, she is also recognized for her roles in films such as Along Came Polly, Marley & Me, and Horrible Bosses.

Aniston is also a businesswoman, having earned a large part of her fortune through endorsements and businesses of her own, as well as a philanthropist involved with numerous charities.

Here’s what you need to know about Jennifer Aniston net worth and how she makes his money:

1. Her Career Started With Friends, and the Show Still Earns Her $20 Million a Year

Ever since 2001, she has been included in the Forbes Celebrity 100 list based on “earnings and fame.” She was number one on the list in 2003. More recently, in 2017, she was ranked second in Forbes’ list of the world’s highest paid actresses, behind Emma Stone. 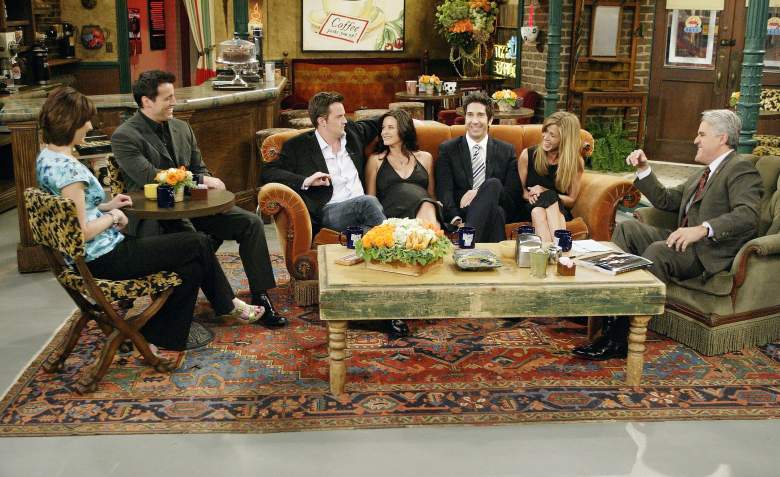 In this handout photo provided by NBC, the cast of “Friends”, actors Lisa Kudrow, Matt LeBlanc, Matthew Perry, Courteney Cox-Arquette, David Schwimmer and Jennifer Aniston sat down with Jay Leno for a special “Tonight Show,” on the set of Central Perk on May 6, 2004 in Los Angeles, California. (Getty Images)

Aniston became a household name because of her character in Friends. During the last two years of the show, Aniston and her co-stars earned $1 million per episode. Today, this kind of salary is only equated by part of the cast of The Big Bang Theory. Though Friends has ended, it is still a major source of income for Aniston. In 2015, USA Today reported that the stars of the show make $20 million each from the show’s syndication, as Friends still generates $1 billion annually for Warner Bros. And even though many of her films like The Bounty Hunter, We AreThe Millers and Just Go With It have not been critically acclaimed, they are still box office hits, having made $136 million, $270 million and $214 million respectively at the worldwide box office.

Although her role choices have been questioned in the past, she has also been rewarded for a few of her performances. For her role in Friends she received multiple nominations and won a Screen Actors Guild (SAG) Award, a Primetime Emmy Award, and a Golden Globe. She was also nominated for a SAG award for her performance in the film Cake and has been nominated for and won several People’s Choice Awards.

2. A Big Part of Her Income Comes From Her Endorsements, From Water to Hair Products

Aniston endorses several products. Given that she became famous on Friends and “the Rachel” was such an iconic hairstyle, it’s fitting that Aniston endorses hair and beauty products such as L’Oreal and Aveeno. She also endorsed and was part owner of hair care brand Living Proof from 2012 to 2016. In an interview, she said that initially she embraced the brand because she “[believed] in the science behind the product,” which was created by Harvard and MIT scientists. About the product itself, the actress said that what lured her was “the company’s unique approach to hair care – using scientific technologies to offer women actual proof.” Aniston said she took an ownership stake in the company because she wanted to be “creatively involved” in the future of the business rather than just acting on its behalf. Her role consisted of providing a cultural approach to the development of products, guiding the creative marketing for the brand, and working with stylists to search for new ideas. Despite the mutually beneficial deal with Living Proof, the actress parted ways with the company when it was acquired by Unilever. Details of the deal were not disclosed, but Aniston made a profit.

She has also worked for non-beauty-related products. She signed a $5 million deal with Emirate Airlines for a digital and TV campaign. The company’s divisional SVP for corporate communications stated that they have been “overrun with requests to see Jennifer again. She has an enduring, universal appeal that is at once sophisticated, but also down to earth.” She has also been a spokesperson for Smartwater since 2007.

She has also released fragrances, some in partnership with Elizabeth Arden.  In total she has launched six fragrances.  She has said she will never make a cologne.

3. Her Production Company Hasn’t Made Much Money, but It’s a Passion Project 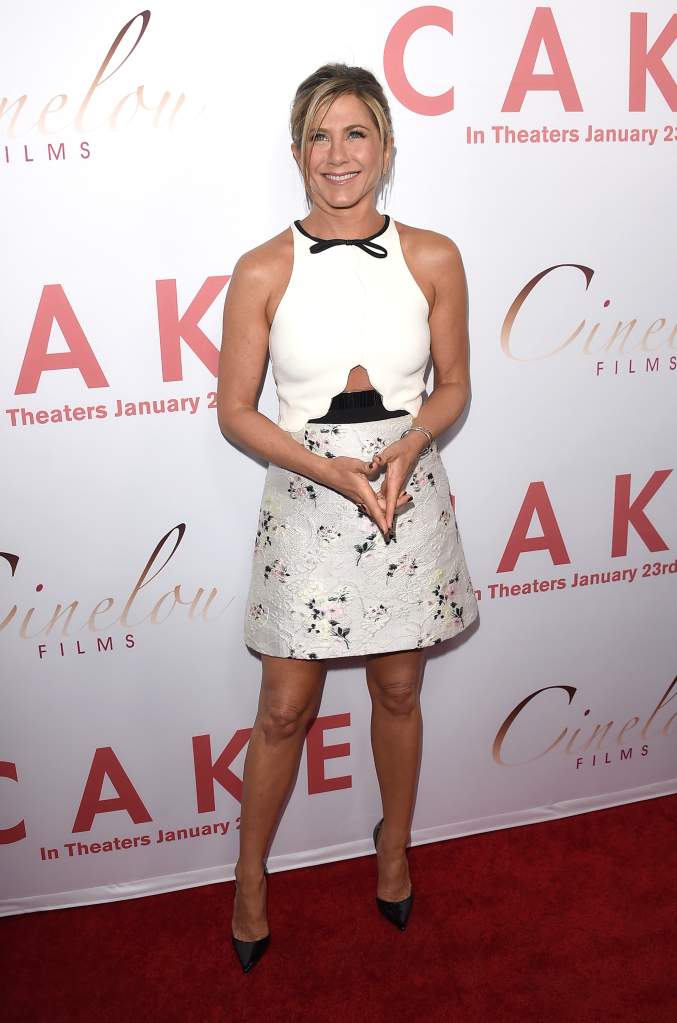 In 2008, Aniston founded her own production company called Echo Films. Previously, she had a different production company with her ex-husband, Brad Pitt, called Plan B. After their divorce, the actress decided to form her own company with production partner Kristin Hahn. Since its creation, Echo Films has acquired the rights to make several film adaptations of various novels such as The Divorce Party by Laura Dave and Getting Rid of Matthew by Jane Fallon. This company’s films make a relatively modest amount of money at the box office, but that is secondary for Aniston and her partner, who claimed to be “drawn to stories about people finding their voice and finding their way because they help us … [make] sense of our lives through the stories of others.”

Works produced by Echo Films include Cake and The Management, both starring and produced by Aniston, and the television movie Five, which she directed and produced. Cake is a particularly special film for Jennifer Aniston: her role as Claire Bennett, a woman suffering from chronic pain, differs greatly from the roles that she usually obtains. The movie received mixed reviews, but her performance was generally praised.

4. She Lives a Luxurious Lifestyle, but She Can Afford It

Aniston invests her money in property. Currently, she owns a midcentury house in Bel Air, which she bought in 2012 for $21 million. The house is situated on three acres of land and includes four bedrooms, six bathrooms, a wine cellar, a guesthouse, a pool, and a vineyard, among other amenities. Previously, she owned a Beverly Hills mansion nicknamed “Ohana,” which she sold for $38 million. According to Variety the mansion measures 10,000 square feet and features five bedrooms, seven and a half bathrooms, a gym, a staff room, a three-car garage, and a large wine cellar. The actress purchased the property for $13.5 million, but its price went up after renovations. In addition, She sold two condos in Manhattan estimated at $7 million. 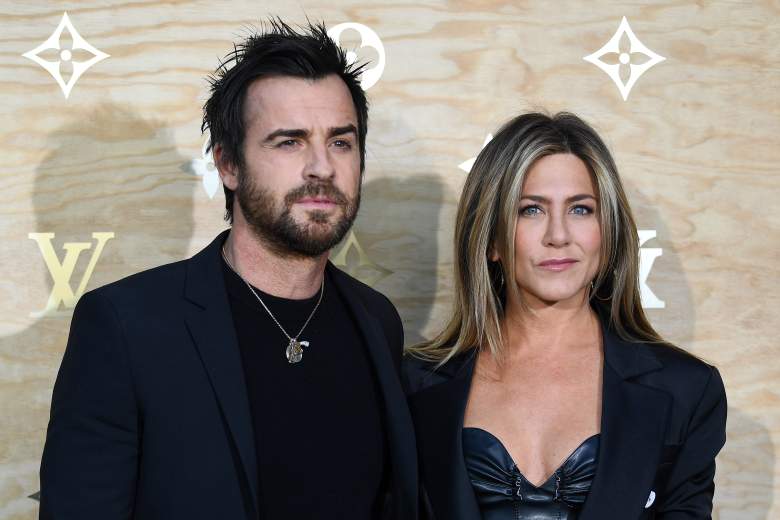 GettyUS actor Justin Theroux (L) and his wife US actress Jennifer Aniston (R) pose during a photocall ahead of a diner for the launch of a Louis Vuitton leather goods collection in collaboration with US artist Jeff Koons, at the Louvre in Paris on April 11, 2017. (Getty Images)

Aniston loves to vacation in style. One of her favorite destinations is Cabo San Lucas in Mexico. She usually stays at Casa Oliver, which costs $15,000 per night and has six bedrooms, six-bathrooms, a gym, a cinema and an infinity pool. For her honeymoon with Justin Theroux, the couple traveled to Bora Bora in a private jet along with some friends. Reportedly, they stayed at the Four Seasons, where the cost ranges from $5,000 to $12,500 per night.

She owns a Bentley Continental GT, which costs $214,000, and a range rover estimated at $70.000. Her home is decorated with pieces including a vintage Jean Royère Polar Bear sofa, which has an estimated value of $754,000. She’s often seen sporting a Rolex Day Date Gold watch valued at $30,000.

5. But She Also Gives Back in Big Ways

A known philanthropist, Aniston is involved with numerous diverse causes. She participated in the Clothes Off Our Back Foundation, which auctioned celebrities’ award ceremony attire and donated the proceeds to children’s charities inside and outside the United State. In 2002, Aniston donated the dress she wore at the Emmys when she won for Best Actress in a Comedy. According to Success, the dress sold for $50,000 and the money funded immunizations for 50,000 children. Most recently, Aniston donated $1 million to hurricane relief. She split the money between the American Red Cross and The Ricky Martin foundation to help victims or hurricanes Harvey, Irma, and Maria across the United States and Caribbean.

Aniston is a supporter of organizations that work to fight cancer. In 2008, she hosted the Stand Up to Cancer show, and in 2013 she was named ambassador to the Key to the Cure campaign by Saks Fifth Avenue and the Entertainment Industry Foundation. She has also been an advocate for the St. Jude Children’s Research Hospital, whose mission is to find the cure for children with cancer and other diseases such as pediatric AIDS. Aniston participates in the hospital’s Thanks and Giving campaigns and visits frequently.

She also supports a variety of organizations including Doctors Without Borders (she donated $500,000 in 2010) and is a vocal activist for human rights organizations such as OmniPeace. In 2007, she was given the Vanguard GLAAD award, which is “presented to those who have made a significant difference in promoting equality and acceptance of LGBTQ people.” She also helped raise awareness for eye dryness disease by becoming the face of Shire plc, a pharmaceutical company (though it’s unclear if she was paid for this role). Earlier this year, the actress donated $500,000 to the Time’s Up campaign to protect victims of sexual harassment.

Aniston also shows her support to politicians by donating to the campaigns of Democratic candidates. She donated $2,300 to Barak Obama’s 2008 campaign, and in 2016 Aniston participated in a fund raising lunch for Hilary Clinton, which raised $3.34 million. She is seen below taking a picture with Clinton and Jewelry designer Jennifer Meyer.

We're with her ? ??@hillaryclinton

In regards to her charitable work, Aniston told InStyle that, “We live an extremely beautiful, fortunate life being able to do what we get to do for a living. And so it’s a way of being able to be in a position to do something for people who are less able. It’s something that makes my heart smile.”