Tekashi 6ix9ine and two of his former associates were taken into federal custody on Monday after being brought up on racketeering charges. 6ix9ine, born Daniel Hernandez, has been denied bail, and TMZ reports that he will remain in custody until a trial. He is facing a life sentence, with a mandatory minimum of 32 years.

With these legal issues pending, some may be wondering how much Tekashi 6ix9ine has made throughout his career. According to Celebrity Net Worth, he has an estimated net worth of $4 million. Learn more about the rapper’s fortune and how he likes to spend his money below.

6ix9ine has made the bulk of his fortune from his rap career. His most notable tracks are the singles “Gummo” and “FEFE” featuring Nicki Minaj and Murda Beatz. The former peaked at number 12 on the Billboard Hot 100, while the latter peaked at number three, eventually going double platinum and becoming 6ix9ine’s biggest hit to date.

6ix9ine’s debut mixtape Day69 was released on February 23, 2017 on ScumGang Records. The mixtape boasted the lead singles “Gummo” and “Keke” featuring Fetty Wap and A Boogie wit a Hoodie, which peaked at number 43 on the Billboard Hot 100. His debut studio album, Dummy Boy, is set for release on November 23.

6ix9ine has made several claims about his wealth and various record deals he’s landed. In January 2018, he got on Instagram to state that he had signed a $7.5 million record deal with an unnamed label. The post was later deleted.

A month later, the rapper claimed that he had signed a $15 million management deal with Birdman’s RichGang label. He’s also gotten on Instagram to claim that he signed a $4.9 million deal to endorse a headphone company. Celebrity Net Worth states that several record industry insiders have denied that any of these deals are genuine.

In addition to his controversial dealings, 6ix9ine has shared his wealth with those less fortunate than him. In September 2017, the rapper visited students at a school in Bushwick and donated money towards their snacks and field trips. He also gave a speech about having confidence in one’s self and following one’s dreams. Check out a video of the event below.

In March 2018, the rapper took time out from shooting a music video to walk around the Dominican Republic and give hundred dollars bills to everyone he ran into. on the island. “I grew up not having sh*t in Brooklyn,” he wrote on Instagram. “Everyone knows me for giving back in my community BUT as a Latino I feel the need to help my people. I’m not Dominican… But we are ALL ONE. Life is what you make it. If I made it I’ll try all in my power for all us to make it… at least have hope.”

Words can’t explain the anger I have right now… I grew up not having shit in Brooklyn… Everyone knows me for giving back in my community BUT as a Latino I feel the need to help my people. I’m not Dominican… But we are ALL ONE ✊? ????????????Life is what you make it. If I made it I’ll try all in my power for all us to make it… at least have hope. ?? God bless us. @william_asher ?

In June 2018, 6ix9ine posted a video of himself handing out platters of food to the less fortunate on the streets of Chicago. During the video, he criticized local rappers for not giving back to their community. Check out the post below.

The following month, 6ix9ine announced that proceeds from his smash single “FEFE” would be donated to various youth programs in New York. “MY JOB IS TO MAKE SURE THESE KIDS HAVE HOPE AND OPPORTUNITY FOR A BETTER TOMORROW,” 6ix9ine wrote on Instagram. “Let’s make this a better world it starts with YOU.”

3. He Was Reportedly Robbed of $750K During a Kidnapping In July

6ix9ine was reportedly kidnapped, pistol-whipped, and robbed on July 22. The rapper gave conflicting accounts of what happened, but he told TMZ that his kidnappers drove him to his home after ambushing him and eventually made off with an estimated $750,000 in jewelry and $20,000 in cash.

Afterwards, 6ix9ine told DJ Akademiks that he believed the kidnapping was orchestrated by someone in his camp. “It was an inside job,” he theorized. “It wasn’t no outside n**gas. It’s n**gas that know how the king of New York moves. The only person that can get a Pharaoh in Egypt is the person who helped build the f*ckin’ kingdom, you know what I’m saying? The n**gas that’s right next to him. The n**gas that know who built that sh*t, that got the blueprints.”

Following the ordeal, 6ix9ine posted a photo of the fallen rapper XXXTentacion on Instagram with the caption: “Nothing materialistic is more important then LIFE. I live to see another DAY. I get to see my daughter another day.” The post has since been deleted. A 31-year-old named Anthony Jamel Ellison was arrested and charged for allegedly participating in the kidnapping on November 6, per Rolling Stone.

4. He Accused MTA Booking of Cheating Him Out of a $3.6 Million Deal

WATCH IT ALL CRUMBLE @elpelonavila rescheduling for Austin ?? DMV everything ????

On November 15, 6ix9ine hopped on Instagram to announce that he fired his entire staff. “I fired everybody,” he said. “I don’t got no manager. I got no booking agent. I got no PR. I got no publicist. I got nobody on my team. It’s just me.” The rapper then warned his fans not to buy tickets to shows unless he says otherwise.

“If you’re booking shows, do not book shows unless I say… They will steal your money. They’re not me,” he explained. “I’m not signing no f*cking contracts. That got nothing to do with me. Whoever is booking shows for Tekashi69 is stealing your f*cking money […] If you’re not on the phone with me, do not book that show, ’cause it’s not me.”

6ix9ine then appeared on The Breakfast Club, where he claimed that his staff and the company MTA Booking had cheated cheated him out of a large payday, as he received only a couple hundred thousand dollars from an alleged $3.6 million deal. “This is MTA Booking—they dirty,” he said. “Most of the money is going to security and the local police because they don’t want you there, so we have to pay them.” Watch the full interview above.

MTA Booking denied these claims, telling TMZ that there was never a $3.6 million deal and that they’re considering legal action against the rapper. 6ix9ine’s attorney Lance Lazzaro stood his ground against the company, telling TMZ: “We have asked [MTA] to show us any contracts with Tekashi69’s signature showing they were acting as an agent to book performances on his behalf and they haven’t provided us with any to date. Their cooperation has been very limited… I would take anything MTA says with a grain of salt.”

5. He Was Denied a $750K Bail After His Arrest for Racketeering

F In the comments for #6ix9ine

According to TMZ, 6ix9ine has been denied bail for now and will remain in custody pending a trial. His attorney, Lance Lazzaro, proposed that the rapper be released if he paid the court a $750K bail and remained on house arrest, but the request was shot down. Lazzaro told TMZ plans to file an appeal with the judge during a bail hearing Tuesday, November 20.

This is not the first time that 6ix9ine has requested to pay a bail. After he was arrested in NYC on July 11, the rapper was granted a $150K bail under the condition that he surrender in Texas, where he’s wanted on an outstanding arrest warrant for a misdemeanor assault charge. After his arrest in Texas, 6ix9ine posted an additional $5K bond for release.

In the recent Breakfast Club interview, 6ix9ine spoke on his wealth and how he feels compelled to protect it from those around him. “There’s so much money out here to be stolen,” he said. “A lot of people think I’m on cocaine now, buggin’ and they like, ‘Yo you just paranoid.’ But I know.” 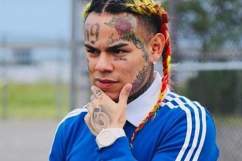 Tekashi 6ix9ine Girlfriend: Is the Rapper Dating Anyone?