A new year means a whole new crop of movies. Some will very likely be amazing (Oblivion) and others…not so much. A bad enough movie can be good, like Troll 2 or In The Name of The King, but that’s only because the perfect storm that has to come together to make movies that bad is as unlikely as the genius required to make the best. It’s not probable that any of the movies on this list are that kind of terrible, and some are only here because they are sequels to other awful movies, but all are more likely than average to disappoint.

1. G.I. Joe Retaliation (march)
Alright, this trailer looks awesome…but the first movie was awful and that’s why it gets a place on this list. Retaliation has a different director, Jon M. Chu, but Chu also directed Justin Bieber’s Never Say Never and Step Up 2… so we don’t have particularly high hopes.

2. Expendables 3 (TBA)
Another formulaic throwback to cheesy 80’s action films? No thanks, the first 2 servings were plenty. On a positive note, Jackie Chan is supposed to be in it…along with anyone else who ever pretend-punched a person in the face.


3. The Last Exorcism 2 Alias: The Last Last Exorcism, We Promise. (March)
Who is still seeing these films? This well has been dry for a long time. The only thing worse would be another Saw movie. (Image via AnythingHorror)


4. Top Gun 3D (February)
Maybe we’re being purists, but there’s just no reason beyond the almighty dollar to do this. Though the success of Titanic’s 3D re-release probably means we’ll be seeing a lot of this in the future.


5. Hansel and Gretel: Witch Hunters (January)
Preview says it all. (Think Van Helsing.) The big action, fun cinematography, awesome looking sets and costumes will all likely be poisoned by thin character development and a lackluster plot. 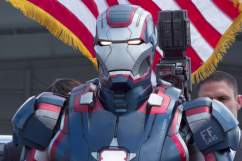 6. The Hunger Games: Catching Fire (November)
This second installment of the Hunger Games (thankfully) gets a new director, Francis Lawrence, but the first one was just such a let-down that we’re not letting ourselves get too excited about Catching Fire. Below is an okay fan-made trailer, since Lion’s Gate has yet to release an official one.

7. The Tomb (September)
Sylvester Stallone’s character takes that infamous “one last job” and gets himself locked up in a secret super-max prison of his own design. Now he must team up with Arnold Schwarzenegger to escape. It’s just hard to imagine this film bringing anything new to the table…but it could happen.


8. Tyler Perry’s We the Peeples (May)
Tyler Perry has identified a pandering feel-good formula based on exaggerated stereotypes and little else. There’s not much hope that Peeples will be any different, though Perry is undoubtedly talented and could be poised to surprise at any time.


10. Black Rock (May)
This film might be the bread and butter of monster-in-the-house genre fans, but the less than subtle girl-power spin looks like it will throw the story into cheesy, unrealistic territory.