While he may be famous for his tender ballads, Ed Sheeran can also bust a rhyme or two when the situation calls for it.

Earlier today, the singer appeared on the French television show Quotidien, where he was asked to do something very out of character: perform a rap verse. And Sheeran didn’t disappoint, flowing over a recording of Eminem’s 2000 classic “The Real Slim Shady.” The shy singer is visibly ernest about his rapping abilities, but he still hands tough with Eminem’s elastic flow and juvenile punchlines.

Sheeran went on to explain that he had a stutter when he was younger and “did all the kind of speech therapy and stuff and it never worked, but that learning rap music” was actually what helped him beat it. Check out the video clip below.

This isn’t the first time Ed Sheeran has flashed his rapping chops. In a recent interview with The Breakfast Club, he also performed a verse, this time from a song on his upcoming album called “Erasers.” Give the original verse and the full interview a watch right below. 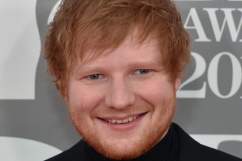