Dej Loaf attends the BET How To Rock: Denim show on August 10, 2016. (Photo by Bennett Raglin/Getty)

Dej Loaf could be stirring up major controversy in the near future.

The Detroit emcee, who’s made headlines in the past for songs like “Try Me” and “Back Up,” has now become the subject of rumors that she has a sex tape on the way. According to AllHipHop, Loaf (born Deja Trimble) and her boyfriend Marion will be leaking their intimate video in the next few days, despite reports that Loaf was unaware she was being recorded at the time. There are reports that Loaf is even be blackmailed with the tape’s existence.

Rumors have also surfaced that Loaf is pregnant with Marion’s child. According to Bossip, an insider close to the rapper reveals that she is already in her first trimester. Loaf’s representatives have shot down both rumors, but many fans are still unsure of what to think of these sudden, shocking developments. 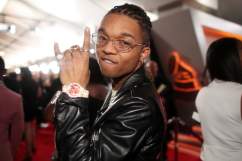 Read More
Music, Rumors, Sex Scandal, Sex Tape
Rumors have surfaced that rapper Dej Loaf will have a sex tape leaking in the next few days.