After plenty of confusion regarding its legitimacy, Kendrick Lamar has indeed released a new song called “Humble” on his Vevo account. The thumping production from Mike WiLL Made It anchors Lamar to an anthem that combines monetary gain and drug dealing with religious imagery and Catholicism.

There are also recurring motifs that have become commonplace in Lamar’s work, from being yourself and prospering in a broken system to, of course, being humble in the face of success. “B*tch be humble, sit down,” goes the menacing chorus, while the rapper deadpans through a shifting backdrop of urban settings.

Check out the full music video below. 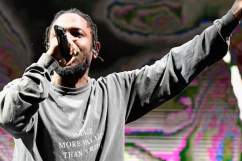