The Denver Broncos open the season Sunday night at home against the Indianapolis Colts, and they’re turning to a good luck charm to get the season off on the right track.

Leah Shafer, a Denver-based singer, will sing the national anthem, marking the second straight time she’s done so at a Broncos home game.

Shafer sang the anthem before the Broncos hosted the Patriots in the AFC Championship Game in January and the Broncos rolled to a blowout win, keeping alive their unbeaten record when Shafer performs the anthem.

Here’s what you need to know about Denver’s good luck charm:

1. The Broncos Have Never Lost When She Performs the Anthem

As the report shown here explains, the success Denver had enjoyed with Shafer in the house led many Broncos fans to wish the team was able to bring her to New Jersey to perform the anthem before the Super Bowl. It turned out the Broncos could have used her when the Seattle Seahawks crushed Peyton Manning and Co 43-8.

2. She Gives Motivational Speeches at Churches About ‘Gut-Wrenching Missteps’ & Redemption

Raising money for Excelsior Youth Center. I am honored to be amongst amazing beautiful TRIUMPHANT women pic.twitter.com/pVYtZVZtJe

Shafer’s bio on her website describes her as a woman who initially squandered her amazing musical talent through what she said were a series of “gut-wrenching missteps” and “dangerously poor decisions.”

Having had less than total success in her initial request to “make it big,” she now performs as both a singer and motivational speaker for various congregations.

Here’s what her bio says about her:

Leah was quickly snapped up to tour internationally as a main soloist of “The Young Americans.” However, in her pursuit to “make it big” as a recording artist, there were 19 different jobs and some dangerously poor decisions. If requested, Leah will share her gut wrenching missteps (and more importantly her redemption!) with your congregation.

Leah is married to Ross Shafer, a former comedian and TV host who succeeded the legendary Joan Rivers on Fox’s The Late Show in 1988.

Shafer, 59, has two sons from a previous marriage.

In 2006, Ross and Leah Shafer adopted a baby girl named LaurenRae, nicknamed “Lolo.” According to Leah’s website, Leah and Ross discovered in 2005 that they would be unable to conceive a child. But the couple adopted Lolo (pictured above in a Peyton Manning jersey) a year later.

In 2005, Leah and her husband Ross found out they were unable to conceive a child. But God had other plans. In 2006, the Shafer’s adopted LaurenRae, at birth. In fact, Leah cut the cord and now little “Lolo” is a young woman-on-fire in training. 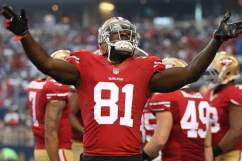